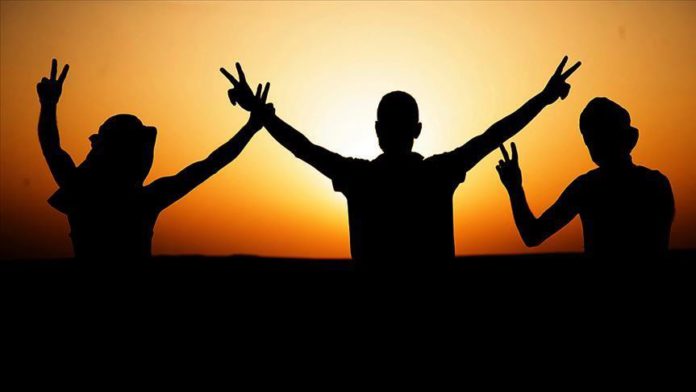 The demonstrators, who gathered in Martyrs’ Square in the capital Tripoli and the northwestern city of Misrata, also protested electricity and water cuts in the country.

Some of the protestors were injured in shootings as security forces were dispersing the demonstrators, among which some groups damaged vehicles in the area.

Amin al-Hashemi, undersecretary of the Libyan Health Ministry, told Anadolu Agency that the demonstrators gathered for legitimate demands and peaceful protests, but some groups abused the purpose of the gathering.

“The people held peaceful protests for their legitimate demands, but later on, some violence-prone groups attacked civilian and police vehicles and public buildings, committing damaging acts. So the police intervened to disperse these groups,” he said.

Al-Hashemi also underlined that some people were injured from gunfire during the demonstrations and that information about their numbers and identities has not yet been obtained.

In all cities of Libya, especially Tripoli, people are struggling with problems that negatively affect daily life such as power outages of up to 20 hours per day, long fuel lines and the increased cost of living with internal migration.

The Interior Ministry announced that those who opened fire on the demonstrators in Tripoli were not among the police forces and that this action was carried out by outside elements who had infiltrated the security forces, adding an investigation has been launched.

“As a result of a follow-up [probe], the security forces determined the identities of these people who opened fire on the demonstrators. They are not subject to any security forces affiliated with the Interior Ministry, and the ministry has initiated a judicial investigation into the incident. The results will be shared with the public with the attorney general’s approval and after the investigation is completed,” it said in a statement.

The ministry also said that one person was injured as a result of the firing on protestors.

The UN recognizes the government headed by premier Fayez al-Sarraj as the country’s legitimate authority, as Tripoli has battled Haftar’s militias since April 2019 in a conflict that has claimed thousands of lives.

Since last September, several high-level meetings were held in the German capital Berlin to put an end to the Libyan conflict with the participation of France, Italy, Germany and the UK. The negotiations are known as the Berlin peace process.

China says inflation down in September