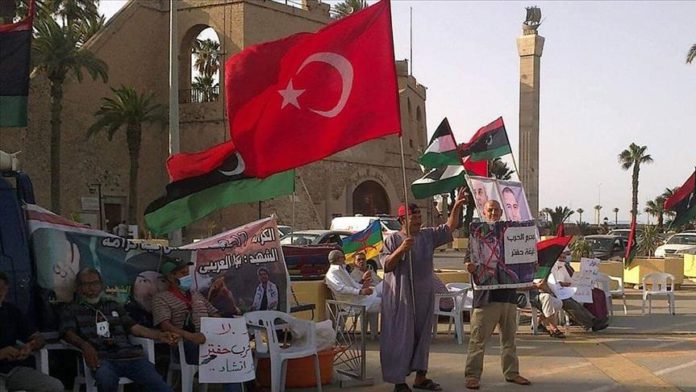 Libyans in the capital Tripoli on Saturday held a demonstration to condemn a provocation that targeted the Turkish flag.

A mass gathering of people in the Martyrs’ Square of the capital, holding Libyan and Turkish flags, condemned warlord Gen. Khalifa Haftar with the slogan “No to war criminal Haftar!”

On Monday, supporters of Haftar – who waged a multi-year war against the UN-recognized Libyan government – attempted a provocation by laying Turkish flags on the road where Libyan Prime Minister Abdulhamid Dibeybe’s convoy would pass during his visit to Tobruk.

Describing the incident as a “heinous act,” Turkey’s Foreign Ministry on Tuesday said the “ugly action” was clearly meant to target the Turkish-Libyan fellowship.