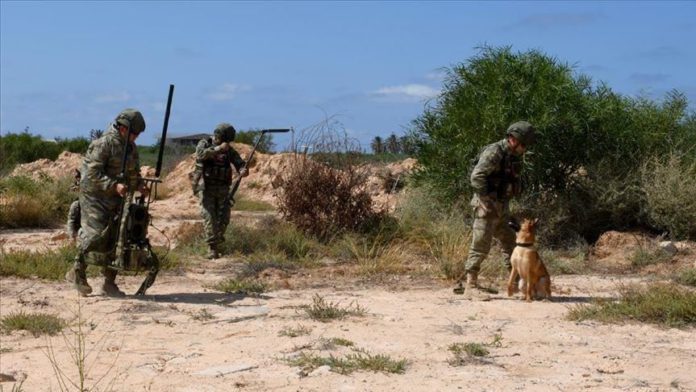 The Turkish Armed Forces’ bomb squads deployed in response to the request of the Libyan government continue to clear southern Tripoli of improvised explosive devices (IEDs) and mines left by militia loyal to warlord Khalifa Haftar and train Libyan army officials in this regard.

Turkish military elements, including professionals from the ground, marine, and aerial commands, carried out training programs with participation of Libyan military authorities and bomb search and detection units.

In a training facility established in the capital Tripoli, Turkish officials introduced the equipment used to locate and defuse IEDs and mines to their Libyan counterparts, which include the devices, detectors, protective suits and bomb disposal robots produced in Turkey.

Since April 2019, Haftar’s illegitimate forces have launched attacks on the capital Tripoli and other parts of northwestern Libya, resulting in more than 1,000 deaths, including civilian women and children.

However, the Libyan government has recently achieved significant victories, pushing Haftar’s militia out of Tripoli and the strategic city of Tarhuna.

According to the UN data, at least 400,000 people have been displaced in war-weary Libya; however, local authorities argue that the real tally of the displaced is much higher.

Haftar’s militants and mercenaries linked to Wagner, a Russian military contractor, had reportedly left many mines and IEDs in southern Tripoli’s civilian settlements amid their withdrawal.

Operating in line with the request of Libyan authorities, Turkish bomb squads cleared the civilian territories of explosive materials.