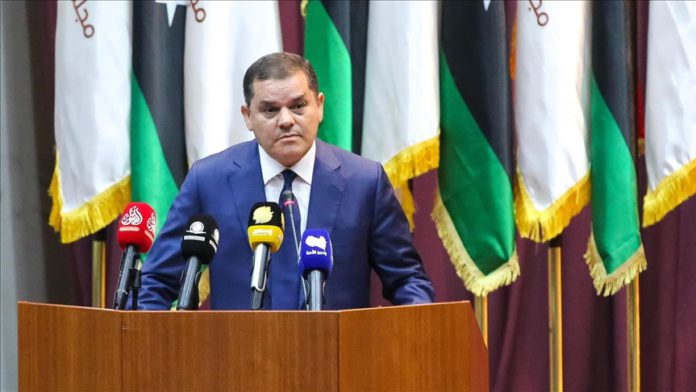 Libyan Prime Minister Abdul Hamid Dbeibeh said Monday that the government will continue to carry out its duties until elections are held in June, amid a bid by parliament to replace him.

Dbeibeh’s remarks came in response to Parliament Speaker Aguila Saleh, who said the chamber would choose a new interim prime minister on Feb. 8.

Speaking to the Libya Al-Ahrar TV channel, Dbeibeh said that what Saleh is doing is a “desperate attempt to renew division.”

He said the government will continue to perform its duties until the completion of the elections and has fulfilled all its entitlements towards the elections without negligence.

Libya’s polls were scheduled to take place on Dec. 24, 2021 but were postponed over disagreements among the country’s political rivals. No new date for the vote been agreed on so far.

The Libyan Political Dialogue Forum, which concluded in Tunisia in mid-November 2020, set the term of the transitional executive authority at 18 months, extending until June 2022, according to the UN mission to Libya.

Earlier Monday, Saleh announced the start of receiving the names of the candidates for the prime minister’s post.

He said at a session for parliament’s roadmap committee that parliament shall start receiving the applications of the candidates.

“In the upcoming session, the House of Representatives will look into nominating a prime minister,” he added.

Parliament spokesman Abdullah Belhaiq said parliament’s session on Feb. 8 will be for assigning the country’s prime minister, while a day before, there will be a session to hear from the candidates.

So far, no one has announced their candidacy for prime minister.

Last week, a group of 62 lawmakers reiterated their support for the unity government of Prime Minister Dbeibeh after introducing a Cabinet reshuffle “in order to enable the government to impose its authority on all Libyan territories.”

Rival parties have been in disagreement over the voting timetable for presidential and parliamentary elections to be held simultaneously or one after the other.

Libyans hope that the upcoming elections will contribute to ending an armed conflict that has plagued the oil-rich country for years.