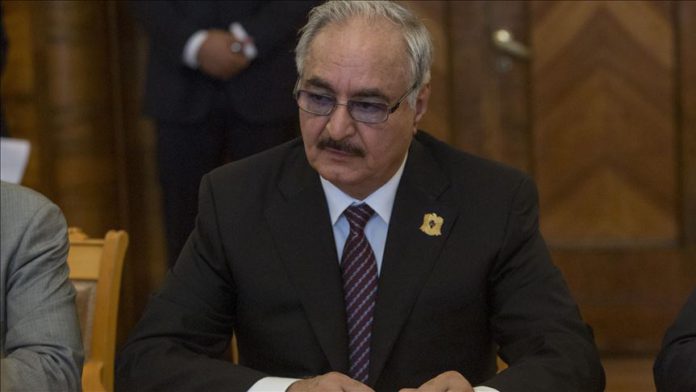 There are signs of a split in Libya between Gen. Khalifa Haftar, who attempted a coup against the UN-recognized government, and forces supporting him.

Ashraf al-Mayar, commander of the unit that supports militias loyal to the eastern Libyan coup plotter, announced his loyalty to Libyan House of Representatives Speaker Aguila Saleh in a video posted on social media.

Stating the House, represented by Saleh, is governing the country, Mayar signaled he is not standing with Haftar.

“It is not acceptable to oppose Aguila Saleh in any way,” he said, adding that opposing him is a “betrayal.”

When Haftar declared Monday he was the ruler of Libya, it was perceived as a move to eliminate Saleh.

Haftar claimed he “accepted the mandate of the Libyan people” and termed the 2015 UN-brokered Skhirat agreement for a unified government “a thing of the past.”

Since the ouster of late ruler Muammar Gaddafi in 2011, two seats of power have emerged in Libya: Haftar in the east, supported mainly by Egypt and the UAE, and the Government of National Accord (GNA) in Tripoli, which enjoys the UN and international recognition.