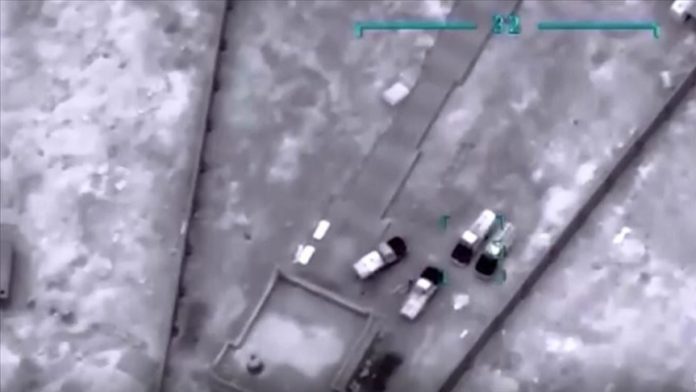 Al-Watiya is regarded as a key airbase in the country and is second only to Mitiga Airport. It was captured in August 2014 by Haftar, the leader of illegally armed forces in eastern Libya, who used it as his headquarters for western operations.

As part of Operation Peace Storm, air operations are being periodically carried out against the base, which is mostly controlled by Haftar’s militias.

Earlier, the Libyan government carried out six airstrikes on a military convoy of Haftar’s forces south of Tripoli.

“Our air forces carried out six airstrikes on an armed convoy of terrorist Haftar’s militia,” Qanunu said in a statement by the press center of the GNA-led Operation Volcano of Rage.

The statement said the operation was carried out on a road between the Kariyyat and Nesma regions near Mersit Valley.

It did not provide further details.

Support for GNA from people of Sabha

Meanwhile, the people of the city of Sabha, located 750 kilometers (466 miles) south of Tripoli, in a joint statement declared the withdrawal of their support for Haftar and announced their support of the GNA government.

People who took part in Libya’s Feb. 17, 2011 revolution that ousted the regime of long-time ruler Muammar Gaddafi along with non-governmental organizations and city residents issued a statement consisting of five articles where they recalled that Haftar is supported by Arab countries such as the United Arab Emirates, Saudi Arabia and Egypt as well as Russia and France.

“Despite the rejection of the Libyan people, [foreign powers] tried to implement the Egyptian experience at gunpoint in the country,” said the statement.

It also wished Allah’s mercy for the martyrs who lost their lives defending Tripoli.

The statement pointed to the Libyan Political Agreement signed in the city of Skhirat, Morocco in 2015 and the political solution and also emphasized the legitimacy of Libya’s High Council of State, which advises the GNA, and the parliament.

While rejecting the military takeover by the Haftar regime in the eastern part of the country, the statement also condemned its attacks on Tripoli.

The GNA accuses several regional and European countries of providing military support to militias loyal to Haftar, who contests the GNA’s legitimacy and authority in the oil-rich country.

On Monday, Haftar declared himself the ruler of Libya, claiming that he “accepted the mandate of the Libyan people” and termed the 2015 UN-brokered Skhirat agreement for a unified government in the country “a thing of the past.”

Halle Berry on lack of Black actress winners at Oscars: 1...