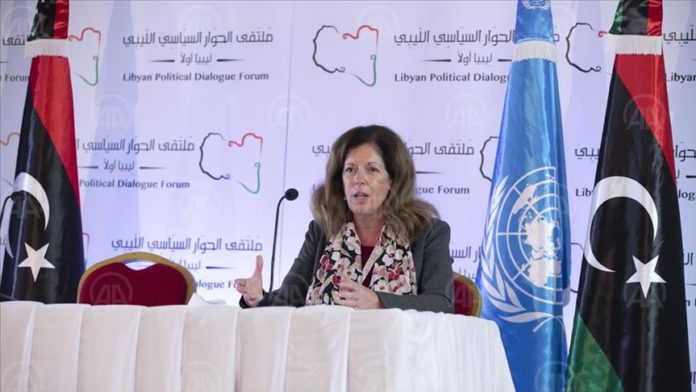 The UN-brokered Libyan Political Dialogue Forum has been postponed until next week due to a lack of consensus on who will lead the transition process.

Stephanie Turco Williams, head of the UN Support Mission in Libya (UNSMIL), announced at a press conference on the closing day of the forum Sunday that “the 10-year conflict cannot be resolved in a week” and announced that the participants will meet again via video conference in a week.

They will meet to agree on the election of the executive authority, Williams said.

No compromise was reached on the names and executive mechanism that will govern the transition process until elections are held at the end of 2021, according to forum attendees.

It was decided on Friday for the transition period to end with elections being held on Dec. 24, 2021, Williams announced.

At the forum, it was stated that they had agreed on the scope, duties and powers of the Presidential Council, which will be composed of three members, each of whom will represent the three regions of Libya, and that the council must make decisions unanimously.

Likewise, it was stated that an agreement was reached on the powers and duties of the government that will undertake the executive power.

A forum participant affiliated with the state Supreme Council who asked to remain anonymous told Anadolu Agency that the forum was blocked on the grounds that some participants insisted that Akile Saleh — the Speaker of the House of Representatives of Tobruk and an ally of the illegitimate armed forces — head the Presidential Council during the transition process.

A total of 75 people selected by the UN to represent different regions of Libya attended the forum, which began on Nov. 9 in the Tunisian capital.