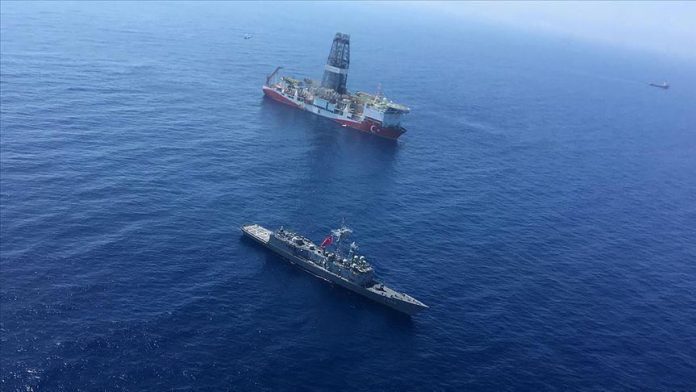 The crisis in Libya and disputes over the eastern Mediterranean’s energy resources have been at the top of the international agenda since two agreements were reached between Turkey and Libya’s UN-recognized Government of National Accord (GNA).

The Maritime Boundary Delimitation Agreement and Military Cooperation Agreement were signed at a meeting in Istanbul on Nov. 27 between Turkish President Recep Tayyip Erdogan and Fayez al-Sarraj, the head of Libya’s Tripoli-based government.

Following this, it was announced that Turkey might send troops to Libya to support the GNA in defending the capital against an offensive led by East Libya-based commander Khalifa Haftar after the Tripoli government invited Turkey to do so under the military cooperation agreement.

On Dec. 26, President Erdogan said in a speech to officials of his ruling party that the government would submit a bill on the mandate for taking military action in Libya and it could be taken up by lawmakers on Jan. 8 or Jan. 9.

This chain of developments, which could be summarized as Turkey expanding its range to the central Mediterranean toward Libya under the assumption that it would not be possible for Ankara to defend its foreign policy interests by only focusing on the eastern Mediterranean is triggering geopolitical transformations in the region.

Dynamics of crisis in Mediterranean

The Mediterranean issue is topping the agendas of regional and global players due to expanding opportunities for collaboration but also due to increasing risks of conflict with the recent formation of geostrategic alliances and bonds between countries in the region.

But recent geopolitical changes are leading to intensified competition in the Mediterranean and dragging the region into inevitable conflicts.

The power vacuum that arose in parts of the region following the Arab Spring and the competition that this created can be considered catalysts for these transformations and the Syrian and Libyan civil wars becoming this regional rivalry’s playing field.

In addition, the situation in the eastern Mediterranean turned into a national security threat for European countries, mainly France and Italy, due to the Libyan crisis, the refugee crisis and the ever-increasing activities of terrorist organizations in the region.

While the Western Pacific is attracting more attention right now, Russia’s and Iran’s reach towards the eastern Mediterranean following the Syrian civil war has caused the region to rise up in the ranks among the U.S.’s foreign policies.

An additional force driving these changes stems from the redefinition of the ‘great-power rivalry’ in the U.S.’s national security and defense strategies towards the Russian, Iranian and Chinese axis.

The eastern Mediterranean became a priority region for the West’s security for the first time after a long period in history due to the power vacuum left by diminished U.S. presence being filled by Russia and China and especially the Russian Federation’s air defense and navy forces.

The discovery of natural gas resources in the eastern Mediterranean, which prompted regional actors to compete with each other and resulted in the redefinition of region in the scope of European energy security, is another determinant in the geopolitical transformations in the region.

Greece, Israel, Egypt and the Greek Cypriot administration, which formed practical alliances with each other regarding the energy resources in the eastern Mediterranean, took the rapprochement further, attempting to isolate Turkey in the region. In addition, Greece has also begun allocating more funds for the defense industry after adopting foreign policies that reflect their willingness to invest in their relations with NATO and the U.S.
Mediterranean security, the Libyan crisis and geopolitical rivalry

No political stability was established in the eight years following the 2011 military intervention in Libya. The intervention, which began on March 18, 2011, destroyed the already weakened central structure and the country went into a period of political separation. Following elections in 2014, the separation in the country caused groups to form around two major blocks: Tobruk in the eastern side and Tripoli on the western side. These blocks eventually started forming alliances with regional powers.

Following the June 2014 elections, a multi-governmental system was set up, and the two sides — the General National Congress (GNC) government and House of Representatives (HoR) government and the armies and clans connected to them — started an armed battle in Tripoli for control of the capital.

In addition, the UAE conducted its first airstrike in Libya, targeting the GNC government-allied Misrata forces marching toward the center of Tripoli. The airstrike was not successful, however, and the HoR government had to fall back from the capital to Tobruk, which Khalifa Haftar was responsible for the security of.

From then on, Egypt and the UAE played a leading role in the Libyan crisis, weaponizing and financing Haftar’s troops, sending air support to the Battle of Benghazi and endeavoring to gain the Tobruk (HoR) government’s legitimacy in the international arena.

Libya for the UAE functions as a field where the Emirates, which is aiming to become an economic and military power in the region, can act as an independent actor and defend its foreign policy interests. The Emirates started playing a big role in shaping the geopolitics of the region, adding their military forces to the equation on top of their foreign politics and impacting regions outside the Gulf.

Egypt has been another significant actor as a neighboring state to the region since the international military intervention on Libya in 2011. However, following the 2013 coup, Libya became an area of much greater interest due to the economic resources that the newly established authoritarian regime needed.

On the other hand, the political dialogue period that was initiated in the summer of 2014, carried out by the UN and outlined in 2015 with the Libyan Political Agreement in Skhirat, Morocco, ground to a halt due to France and Italy revising their foreign policies in favor of military leader Khalifa Haftar, especially after the Paris Summit in May 2018 and the Palermo Summit in November 2018.

In a period where security is becoming a central theme in the Mediterranean for both countries, the political separation in Libya began being defined as a source of instability and a national security threat due to the presence of terrorist organizations in the region and the refugee crisis. With the changes in France and Italy’s policies starting in 2018, the Gulf-Egypt-Russia axis began to gain the initiative.

The 2011 military intervention-involved actors’ such as the U.S., France and Italy and the inability of international organizations, especially the UN, to show a decisive and holistic will for a solution to the Libya crisis are among the main reasons these geopolitical transformations took place.

No ‘decisive will’ from international actors

Having the military support of Egypt and the Gulf States and making significant progress on the field, Haftar is now being considered a solution for the stability of Libya. Russia deployed military units to the battlefield in Libya after Haftar’s army started retreating from major battlefronts and the need for fighters increased after August 2019, when some of the local clans forced the militia’s forces to fall back. This also gave Russia the opportunity to expand its reach from the eastern Mediterranean toward the western Mediterranean.

While the direction the civil war in Libya is heading remains uncertain, it can be recognized that the Libya situation is of critical importance to Turkey’s interests in the Mediterranean and can therefore be defined as one of the focal points of Turkish foreign policy and that Libya is seen as an area of conflict for regional rivals who face each other in other areas as well.

On the other hand, it is necessary to note that it was the 2011 military intervention-involved actors such as the U.S., France and Italy and international organizations’ inability to show a decisive and holistic will for the solution of the Libya crisis that caused these geopolitical transformations, and that was how the Mediterranean made its return to international politics as an area of key importance for many actors.

[Nebahat Tanriverdi Yasar is a Ph.D. candidate at Middle East Technical University Department of International Relations and works as a freelance research specialist on Tunisia, Libya and Egypt.]