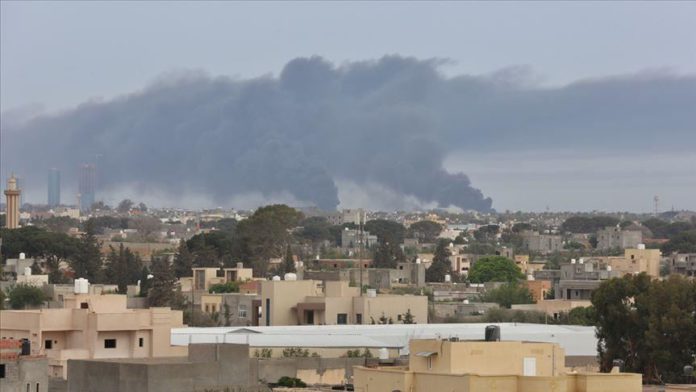 Libyan Army has neutralized a large number of militias loyal to renegade commander Khalifa Haftar as part of Operation Peace Storm launched on March 26 to counter attacks on the capital Tripoli.

A total of four aircrafts, a helicopter, two drones, a vast number of tanks, artillery, armored vehicles, heavy weapons as well as facilities used by Haftar’s militias were also destroyed by the army, according to information obtained by Anadolu Agency.

Turkish soldiers continue to provide training and consultancy services to the Libyan Army in line with the UN Security Council Resolution 2259 and upon an official call by the Libyan government.

The soldiers are carrying out their activities in the region which is secured by the Libyan government without any casualties so far.

Attacks carried out by Haftar’s militias continue to cause considerable civilian casualties in the country.

A total of 28 people, including women and children, were injured, while at least five civilians were killed in recent attacks by the Haftar’s militias south of Tripoli, according to the figures released by the UN Support Mission in Libya.

The Libyan Army has recently gained advantage against Haftar’s militias, which are supported by France, Russia, the United Arab Emirates and Egypt, while Haftar’s forces suffered heavy casualties and had to retreat to the south.

On April 18, the Libyan government forces launched a military offensive to recapture Tarhuna, a town of strategic value for Haftar and his last major stronghold in the area surrounding Tripoli.

The government said that its forces captured 102 fighters and seized heavy military equipment, advancing against forces loyal to Haftar as part of the operation.

Tarhuna is also a major focal point for Haftar’s militias for their supply lines from Al-Jufra air base.

In a video message on April 27, Haftar unilaterally declared himself the ruler of Libya.

Drawing to street demonstrations in areas under his control, the warlord claimed he “accepted the mandate of the Libyan people” to govern the country.

He said the Skhirat agreement, signed in 2015 by the warring sides in Libya under the auspices of the UN, was “a thing of the past”.

As part of the agreement signed in Morocco, the Libyan government was formed to manage the transition process in Libya.

Forces loyal to Haftar on April 30 announced a unilateral cease-fire during the holy month of Ramadan.

Despite the cease-fire, three civilians were killed in a rocket attack carried out by the Haftar’s militias in Tripoli on the first day of Ramadan.

At least 15 civilians lost their lives and more than 50 others were injured in Haftar’s attacks which continued in the first week of May.

Haftar has intensified attacks on civilians since the beginning of May as the Libyan Army recently inflicted severe losses on his militants.

They recently mounted attacks against the capital, and have targeted the area where Turkish and Italian embassies are located, along with Mitiga Airport and civilian aircraft and infrastructure.

Following the ouster of late ruler Muammar Gaddafi in 2011, Libya’s government was founded under a UN-led political agreement reached in 2015.