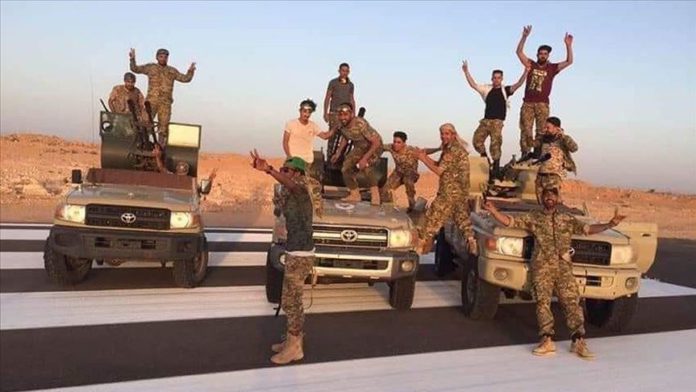 The aim of the Libyan army’s move to the strategic Gulf of Sirte is to clear the oil crescent lying between Sidre and Benghazi of Haftar militants and to revive the Libyan economy, Mesut Hakki Casin, a professor of law at Istanbul’s Yeditepe University told Anadolu Agency.

Casin assessed how to ensure security in Libya’s oil and gas fields occupied by renegade commander Gen. Khalifa Haftar after the Libyan army takes back control.

“The main goal of the Libyan army moving along the triangle of Mistara, al-Qaryah and Murzuq is to ensure the security of oil wells and pipelines in Sirte, Ajdabiye and Benghazi, the cities located on the Mediterranean coast,” Casin said.

This move towards the oil fields has shocked Haftar, who has led attacks on the internationally-recognized government in Tripoli and the western parts of the country.

Casin considers that Haftar’s influence is waning. He explained that Haftar has complained about the countries that promised support but did not follow through.

“Haftar will be eliminated from the equation in Libya soon,” he said.

Casin said Ankara would continue its support for the protection of oil fields, pipelines, refineries and harbors liberated by the Libyan army from Haftar.

Turkey has played a pivotal role in the withdrawal of militias loyal to Haftar as support from Turkish air, land and navy forces and the effective deployment of unmanned aerial vehicles (UAVs) saw these forces abandon their weapons and tanks.

“Ankara is ready to secure the energy areas in Libya through air and sea operations. Thus, the defense and security of Sirte and Terhune will be ensured by Turkey’s support,” he added.

Ankara and Libya’s relations were further cemented through the signing of an exclusive economic zone agreement between Turkey and Libya in November last year. This agreement will see the provision of military advice and the approval of mutual maritime jurisdictions based on international law.

“The win-win relationship between Ankara and Tripoli has brought to light Israeli and Egyptian violations on Libya’s maritime jurisdictions,” Casin said.

He noted that in an about-turn, Israel is seeking to resume negotiations with Ankara for the sale of its gas to European markets via Turkey following the collapse of the Athens’ East Mediterranean energy project that aimed to eliminate Ankara in the region.

“Libya was a gate opening to the Mediterranean Sea for the Ottoman Empire. Today, Turkey is the key to this gate and will open the gate to the sea again,” he said.

According to Casin, the meeting last December organized by Turkish President Recep Tayyip Erdogan and Libya’s Serrac in Ankara represents a pathway to normalization from which Turkish firms will be able to develop projects in Libya, covering energy, infrastructure, education and economic development.

Libya has the largest proven crude oil reserves in Africa at 48.4 billion barrels and natural gas and oil revenues that represent approximately 90% of the government’s revenue.

Since 2014, Haftar’s militias have been targeting oil fields, which represent the lungs of the Libyan economy.

Abdennur Toumi, an expert on North Africa in the Center for Middle Eastern Studies says that due to Haftar’s strategy, the petrol crescent region, where 60% of hydrocarbons are exported from, has become passive.

In the former Gaddafi era, oil shored up the massive public sector as the principal source of income that generated millions for Libyans but rendered it a welfare-state economy, he said.

Libya produced some 1.6 million barrels per day and exported mostly to Italy, France, Spain and Germany. However, the Libyan economy has experienced a significant decline because of political unrest and a corresponding decline in production in oil fields under the control of Haftar forces.

Nonetheless, Toumi concurs that if the Libyan army takes full control of Sirte, it will be a game-changer in the conflicts’ dynamics.

Toumi stressed that the Abu Dhabi-Paris axis, the two main supporters of warlord Haftar, would continue to obstruct a political solution in Libya through their efforts to export Libyan oil illicitly.

“Reportedly, the UAE has held secret negotiations with Haftar in efforts to export Libyan oil through channels other than the sole exporter approved by United Nations (UN), and the National Oil Corporation (NOC).”

According to the UN report, the UAE and Haftar had violated UN National Security Council resolutions that ban any export of Libyan oil except through the country’s NOC.

Toumi suggested that Ankara provide more resources, including exploration and drilling operations to increase oil production in the country, which will solidify relations between Tripoli and Ankara, and will allow Turkey to have a solid presence in the region, following the new Turkish-Algerian rapprochement to support Libya that intensified this year.

Most of Libya’s oil reserves have remained untapped

Up to 2014, the North African country on the banks of the Mediterranean Sea was ranked among the world’s top 20 oil-producing countries.

Due to the closure of oil wells and restrictions put in place by pro-Haftar armed groups, the Libyan economy suffered a loss of $5 billion in January 2020.

From 2016-2019, the country had already lost more than $100 billion, as Ibrahim Cadran, a Haftar ally interrupted oil excavation to the east of the country.

Cadran has formed a group called Petroleum Facilities Guards to prevent the movement of petroleum products from oil fields.

While international energy institutions say that most of Libya’s oil reserves have remained untapped, the conflict has also hit the extraction of oil from established resources.

The country’s largest oil and gas facilities, such as Sidra, Ra’s Lanuf, Brega, and Zueitine, are located in the war-torn east of Libya on the Mediterranean coastline.