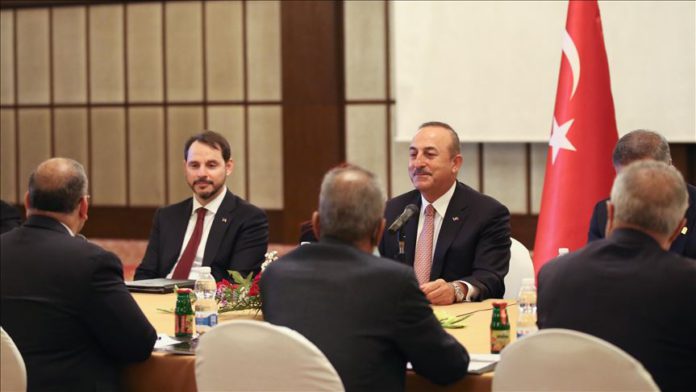 Libya warmly welcomed the visit by a Turkish delegation to the country, Foreign Minister Mevlut Cavusoglu said late Wednesday at a press conference.

“Our visit received a great welcome in Libya. The purpose of the visit is clear: it is to strongly reiterate that Turkey stands with Libya. We also discussed how the two countries can improve bilateral relations,” Cavusoglu said.

“As you know, we have signed a memorandum of understanding with Libya about restricting maritime jurisdiction. We have discussed all of the steps to be taken in the Mediterranean in terms of energy. We talked about what is to be done to achieve a permanent ceasefire and a political decision. We also discussed how we will continue our work under the framework of the UN. We evaluated the steps to be taken within the international community,” he added.

Reminding that mass graves were found in the city of Tarhuna in Libya, Cavusoglu said Turkey supports Libya’s endeavors to take this issue to the International Criminal Court.

“These inhumane massacres should be questioned, and those responsible should be taken to the court,” he stressed.

Turkey and Libya’s economic partnerships were also discussed during the visit, Cavusoglu said.

“Turkish firms’ business activities were cut short in Libya due to the war. There are projects, investments that need to be completed. We therefore also discussed the economic aspects of our relations,” he added.

“We have visited our teams in the region who are there for training and consultancy as part of our memorandum of understanding. They are working there day and night. I congratulate them,” Cavusoglu said.

He also congratulated the Turkish Armed Forces for their brave struggle against terrorist organizations in northern Iraq, adding Turkey’s two military operations there are proceeding successfully.

On Monday, the National Defense Ministry announced the start of Operation Claw-Eagle in northern Iraq, noting that Turkish fighter jets had destroyed caves where terrorists were hiding.

Meanwhile, Cavusoglu congratulated former Turkish Ambassador Volkan Bozkir on being elected president of the UN General Assembly ahead of its 75th session in September.

“Ambassador Volkan Bozkir, nominated upon the instruction of our President, has been elected President of 75th UNGA w/ample support of UN Members. Congratulations to Amb. Bozkir for this achievement, which is proof of Turkey’s respectable position. Will support all his endeavors,” he said on Twitter.