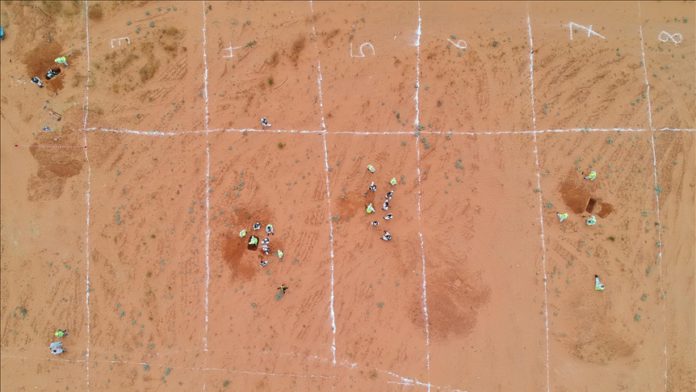 Libyan authorities on Sunday exhumed 10 bodies from a mass grave in Tarhuna city, south of the capital Tripoli.

The mass grave was discovered on Saturday in a large agricultural area known as Mashrou’ Alrabet in the city, Lutfi Tawfiq, director of the General Authority for Research and Identification of Missing Persons, told Anadolu Agency.

He said the grave is the second to have been discovered in the city in the past 10 days.

In March, the authority said it has lists of 3,650 missing persons in different Libyan cities, including 350 in Tarhuna, which was a stronghold for Libyan warlord Khalifa Haftar before being defeated and forced to leave the city in June 2020.

According to Libyan official sources, Haftar’s forces and affiliated militias committed war crimes and acts of genocide in the period between April 2019 and June 2020.

On March 16, a new transitional unity government headed by Abdul Hamid Dbeibeh was approved to lead the country to elections this December.

Libyans hope that the move will end years of civil war that have engulfed the country since the ouster and killing of strongman Muammar Gaddafi in 2011.