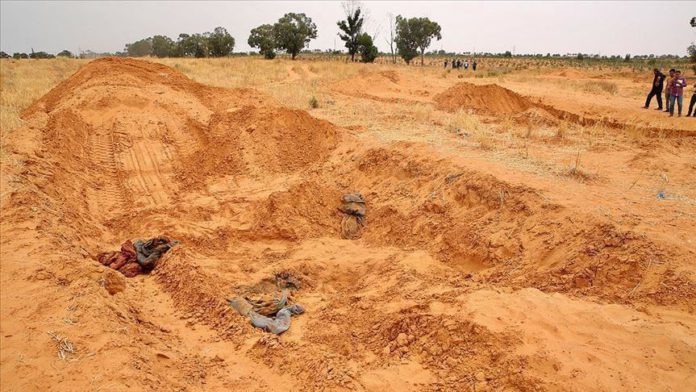 The Libyan army said Saturday 190 corpses have been found in mass graves south of Tripoli and the city of Tarhuna since June 5.

In a statement, the army said 106 bodies, including children and women, were found with signs of torture inside a hospital morgue in Tarhuna on June 5.

A further 37 bodies were found in another hospital in the city, of which 14 corpses were identified, the military said.

According to the statement, 15 additional bodies were found in Qasr bin Ghashir area, south of Tripoli. The military said those bodies belonged to persons kidnapped by militia of warlord Khalifa Haftar.

The remains of 14 unidentified people were also found south of Tripoli on June 6 while 15 bodies were discovered in a well and a mass grave near Tarhuna on June 8-10, the army said.

On June 11, the army said three more bodies were found in a mass grave in the same city.

Earlier this week, the Libyan army said it was awaiting a UN report that exposes “crimes and genocides” committed by Haftar’s militia in Tarhuna.

The Libyan army recently inflicted heavy blows on Haftar and liberated Tripoli and Tarhuna, in addition to other strategic locations, including Al-Watiya airbase, from his militias.