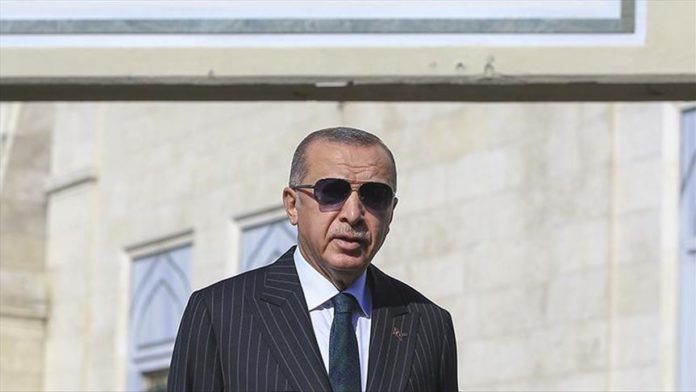 The permanent cease-fire agreement between Libya’s warring parties “does not seem to be reliable,” the Turkish president said on Friday.

“The cease-fire agreement [in Libya] is not the one at the highest level. Time will show how long it will persist at a lower level,” Erdogan told reporters following Friday prayers in Istanbul.

Earlier, the UN special envoy on Libya announced the signing of a cease-fire agreement between the delegations of both main warring sides in Libya.

Stephanie Turcos Williams, who heads the UN Support Mission in Libya (UNSMIL), said the Libyan parties reached an agreement for a “permanent” cease-fire in all areas of the country.

As the parties were signing the agreement, the UNSMIL released a statement, saying: “Good news for Libyans.”

“The 5 + 5 Joint Military Commission talks in Geneva today culminate in a historic achievement as Libyan teams reach a permanent cease-fire agreement across Libya. This achievement is an important turning point towards peace and stability in Libya,” the UN mission said.

Responding to a question on the recent developments in the Azerbaijan-Armenia conflict, Erdogan said Turkey has also a right to take place in establishing peace at least as much as Russia that intends to join the negotiation process for the resolution of dispute and peace between the two countries.

He reiterated that Turkey is also among the members of the Organization for Security and Co-operation in Europe (OSCE) Minsk Group – co-chaired by France, Russia, and the US – which was formed in 1992 to find a peaceful solution to the conflict, but to no avail.

The latest humanitarian truce in Upper Karabakh, or Nagorno-Karabakh, an internationally recognized territory of Azerbaijan, came into force last Saturday.

High number of infections in Istanbul

Touching on the rising coronavirus cases in the country recently, Erdogan urged Turkish people to follow the measures and to avoid being in crowded places.

“Mask, distance, hygiene. We must approach them acutely, we have to be careful.”

Earlier, Health Minister Fahrettin Koca said the novel coronavirus cases are once again on the rise across Turkey.

Warning of the upward trend in Istanbul, Koca said the number of coronavirus cases in the megacity has made up 40% of nationwide toll, reaching fives times of cases in the capital Ankara.

According to the latest official data, overall coronavirus patient count in Turkey currently stands at 355,528. The virus has killed 9,584 people thus far, while 310,027 people have recovered.