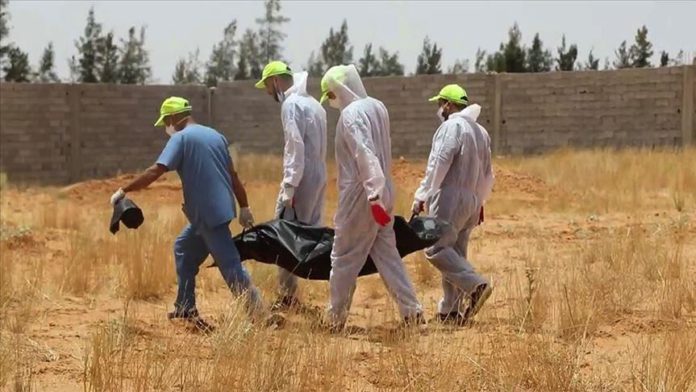 Mass graves have been found in the city of Tarhuna, the last stronghold of warlord Khalifa Haftar which was liberated by the Libyan army on Friday.

The Press Office of the Libyan government’s Burkan Al-Ghadab (Volcano of Rage) Operation shared images of the mass graves.

“So far, two bodies have been exhumed. The region is full of corpses,” Lutfi Tevfik Misrati, head of an office for investigating disappeared persons in the country, told Anadolu Agency.

“We think that there are 10 to 12 bodies in another grave in the field. Graves were found at five or more different points,” Misrati said.

Health authorities will perform autopsy for the dead bodies and the necessary steps will be taken for their burial, he added.

Libyan Red Crescent officials said that an investigation was launched in the region and they asked support from the military prosecutor’s office and the office for investigating disappeared persons.

Libya on Friday announced that it had found 106 bodies, including women and children, in a hospital in the city of Tarhuna soon after it was liberated from Haftar forces.

A written statement by the Burkan Al-Ghadab Operation said that according to initial evaluations, the victims had been executed.

Health Ministry spokesman Amin al-Hashemi said there were signs of torture on most of the bodies.