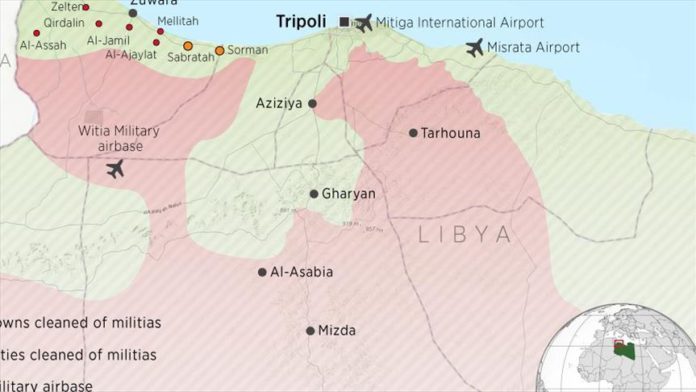 A government source, who spoke on condition of anonymity, said heavy artillery by the Libyan army paved the way for forces to launch a ground offensive at the base.

“Clashes are raging on near the base,” the source said.

On Friday, the Libyan government conducted five air operations targeting militants loyal to Haftar at the base.

As part of Operation Peace Storm, air operations are being periodically carried out against the base.

Turkish President Recep Tayyip Erdogan said in a televised speech on Monday that “good new news from Libya will be returned to us soon, God willing,” stressing that “Libya’s security, safety and prosperity of its people is the key to stability in the entire North African and Mediterranean region.”

Erdogan said Turkey is determined to continue supporting Libya’s legitimate government to transform the area into a region of peace.

He also said thanks to Turkey’s support for the legitimate government Haftar is losing ground.

The Libyan army has recently made gains against Haftar’s militias, which are supported by France, Russia, the United Arab Emirates, and Egypt.