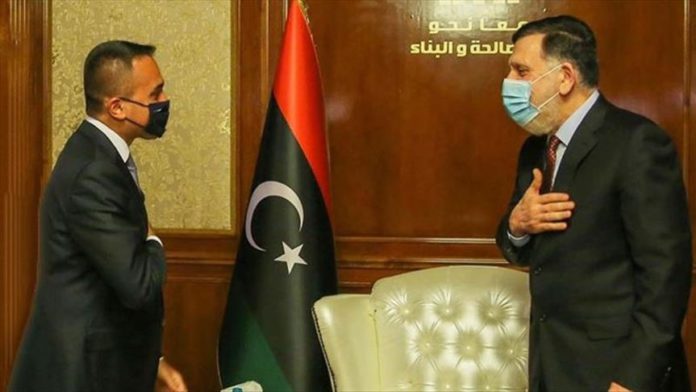 Security cooperation and efforts against illegal immigration, human trafficking, and smuggling were part of the topics discussed.

The two also spoke about “preparatory steps for the return of Italian companies to resume their activity in Libya, and Italy’s continued contribution to the demining process from areas that were under the control of the aggressor [pro-Haftar] militias,” the statement said.

The officials discussed the necessity of resuming oil production, which remains Libya’s main source of revenue.

Libya, with the largest oil reserves in Africa, can produce 1.2 million barrels of crude oil per day.

However, production has fallen below 100,000 barrels a day due to interruptions by pro-Haftar militias over the past six months.

Since April 2019, Haftar’s illegitimate forces have launched attacks on Tripoli and other parts of northwestern Libya, resulting in thousands of deaths, including women and children.

The Libyan government, recognized by the UN as the country’s legitimate authority, has recently achieved significant victories, pushing Haftar’s forces out of Tripoli and the strategic city of Tarhouna.

The country’s new government was founded in 2015 under a UN-led agreement, but efforts for a long-term political settlement failed due to a military offensive by Haftar, who has been backed by France, Russian paramilitary group Wagner, the UAE, and Egypt.

Unlike 2008, psychology to cast long shadow after corona crisis

April 25, 2020
We use cookies to ensure that we give you the best experience on our website. If you continue to use this site we will assume that you are happy with it.Ok