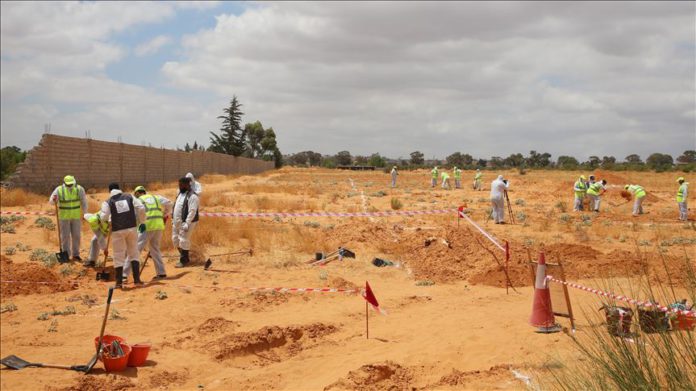 Libya on Thursday revealed a list of suspects involved in mass graves discovered in Tarhuna city and areas south of the capital Tripoli.

The list released by the country’s prosecutor general’s office will be distributed to corresponding institutions to arrest the suspects, a source at the office told Anadolu Agency on condition of anonymity due to restrictions on speaking to media outlets.

The source noted that in the list are names of leaders of the pro-Khalifa Haftar 9th Brigade known as Kaniyat.

On June 5, the Libyan army liberated Tarhuna, a focal location used as an operation and supply center by militias loyal to renegade commander Haftar.

Hundreds of corpses were found in the city hospital, a container belonging to the hospital and a water well near the city.

The tragic part in Tarhuna came to light when mass graves were excavated as part of investigations launched by the Libyan government.

Since April 2019, Haftar’s illegitimate forces have launched attacks on the capital Tripoli and other parts of northwestern Libya, resulting in more than 1,000 deaths, including those of women and children.

However, the Libyan government has recently achieved significant victories, pushing Haftar’s forces out of Tripoli and Tarhuna.

Growing use of AI for health presents global opportunities, challenges: WHO