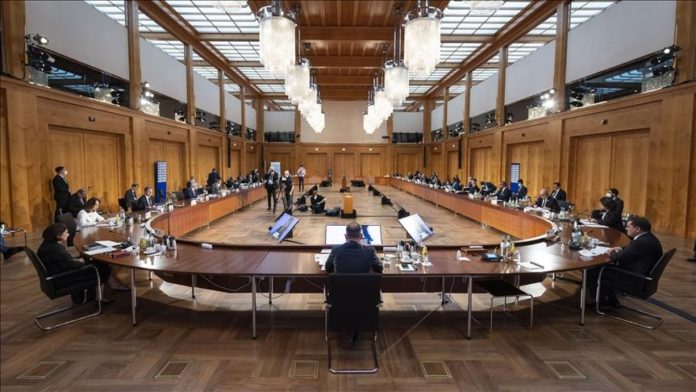 The second Libya conference concluded in Berlin on Wednesday without producing the concrete and binding results needed to establish peace in Libya, experts said.

Hosted by Germany for the second time, the conference discussed Libya’s political process, national elections slated for Dec. 24, and the withdrawal of all foreign forces and mercenaries from the country with the participation of international actors.

The 58-point final declaration announced after the conference underlined that the elections scheduled for Dec. 24, 2021 “need to take place as agreed and all foreign forces and mercenaries need to be withdrawn from Libya without delay.”

Commenting on the conference and its results, a guest researcher at the Centre for Applied Turkey Studies (CATS) of the Berlin-based Institute for International and Security Affairs (SWP), Nebahat Tanriverdi Yasar said: “It’s wrong to link the progress on Libya to the first Berlin Conference in January 2020 and present it as a diplomatic victory.”

“This success attributed to the Berlin Conference, which remained a gentlemen’s agreement, complicates the determination of the conditions and vulnerabilities of the ongoing fragile cease-fire, and thus the responsibilities of the international community in peacebuilding,” Yasar said.

The final declaration of the conference has left some questions unanswered on the concrete outcomes that will guarantee that the elections are held, said Yasar, an expert on the North Africa region.

She argued that the lack of binding resolutions that would have guaranteed the emergence of tangible results was the most important deficiency of the efforts in Berlin that has remained since the first conference last year, she said.

“The conference has two prominent concrete targets,” said Yasar, with the first being that elections are held. She said, however, that elections could be used by the warring parties as a means of eliminating each other from Libyan politics and that preparations should be made for the risk of conflict.

She went on to say the second concrete target was to end foreign intervention. The withdrawal of foreign forces and mercenaries is seen as the most important stage of this.

Withdrawal of foreign forces and mercenaries

Speaking on the role of the countries participating in the conference on foreign forces and mercenaries in Libya, Yasar said: “States like Russia and the UAE do not officially accept their relations with foreign fighters in Libya. And we expect these actors, who do not formally acknowledge their existence, to play a positive role in the withdrawal.”

Touching upon Turkey’s reservation on the clause about the withdrawal of foreign forces and mercenaries, Yasar said Ankara has objections on two main points.

First, legitimate forces training Libya’s military could not be evaluated in the same manner as mercenaries, and second, Turkey’s military presence has a legal basis because it is based on a security cooperation agreement signed between the two sovereign states, she added.

The 2019 security cooperation agreement between Turkey and Libya has been credited with helping end the civil war in the country and promoting peace and unity under the legitimate government.

“Considering that despite this objection based on legitimacy and legal responsibility, it was not evaluated under a separate heading in the final declaration of the Berlin Conference, we see that Turkey was requested to end its military presence and activities in Libya, and therefore this issue will remain on the agenda in the coming period,” she said.

Conclusions of Berlin are ‘all theory’

According to Libyan political analyst and activist Ahmed Sewehli the conclusions of the conference are “all theory.”

It is very hard to trust the articles in the final declaration because “it says a lot of things that nobody at the conference has actually done,” Sewehli told Anadolu Agency, adding that elections are “the most recent goal of the so-called international community.”

However, the issue of accountability comes before elections, Sewehli asserted.

“Nobody has actually done anything about” holding perpetrators of war crimes and offenses considered illegal under international humanitarian law accountable, he said. “So, none of the countries have shown any kind of intent to hold to account.”

“How can we believe that those who do nothing about accountability want to do something for elections?”

Some countries participating in the Berlin Conference that are calling for election in Libya “are dictatorships, which do not allow elections in their own countries, like for example Egypt,” he asserted.

“I can’t believe that the United Arab Emirates, and Egypt, and France were in Berlin to try and do what’s best for the Libyan people,” he said adding that the goal of the first conference in January 2020 was to stop the war, but it did not.

Fighting did not come to a halt in the war-torn country until May last year, noted Sewehli, arguing that it was the “Turkish intervention as per the agreement that stopped the war, rather than the Berlin Conference.”

He went on to say: “If Turkey did not intervene, we would not have had the Berlin II.”

“Turkey is the only country which officially has forces in Libya.”

However, Russian-controlled Wagner mercenaries occupy large territories and cities in Libya, said Sewehli. The oil facilities and ports in and around the coastal city of Sirte are under Russian control, with the UAE also holding a base in the east of the country, he underlined.

The Berlin Conference “basically” asked Turkey to leave Libya because these actors deny their presence in Libya, he said adding: “It’s such an embarrassment. It is shameful.”

“This is a shame and that’s why I don’t take Berlin seriously at all. If this conference can’t name who the forces in Libya are, how can they ask them to leave?” he said.

“Clearly, Europe and the West don’t know what they want to do. They want Russia out, or do they want Turkey out? We do not want to be bombed again and again by foreign countries. The only country which came to Libya and did not bomb Libya but actually defended Libya, was Turkey,” he said.

Held under the auspices of the UN and Germany, the Berlin Conference was attended by the head of Libya’s Presidential Council Mohammed al-Menfi and Prime Minister Abdul Hamid Dbeibeh, UN Special Envoy to Libya Jan Kubis, and the foreign ministers of the participating countries, including Turkey.