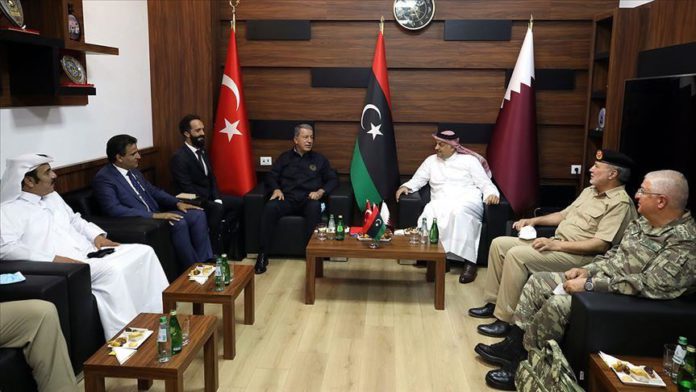 Turkey on Monday reiterated its support for Libya’s legitimate government, with the visiting defense minister saying, “Libya belongs to Libyans”.

“We believe that we will achieve the wanted results by supporting our Libyan brothers in their just cause,” Hulusi Akar said during his visit in the capital Tripoli.

Accompanied by Turkish Chief of Staff Gen. Yasar Guler, Akar is visiting Libya to review the training and advisory activities carried out under a memorandum of understanding (MoU) signed between the two nations on security and military cooperation.

The duo met with the Turkish training personnel at lunch, following the inspections at the Defense Security Cooperation and Training Assistance Advisory Command.

Among the participants of the lunch was Qatari Defense Minister Khalid bin Mohammad Al Attiyah. Akar said Qatar also supports efforts to ensure unity and peace of Libya, and a permanent cease-fire in the war-weary country.

“We believe that we will get the desired result supporting our Libyan brothers in their just cause,” Akar said.

Under the deal, Turkey has sent advisers to help the Libyan army defeat militias of warlord Khalifa Haftar.

Libya’s government, formed in 2015, in the wake of the ouster of Muammar Gaddafi in 2011, has faced a number of challenges, including attacks by Haftar.