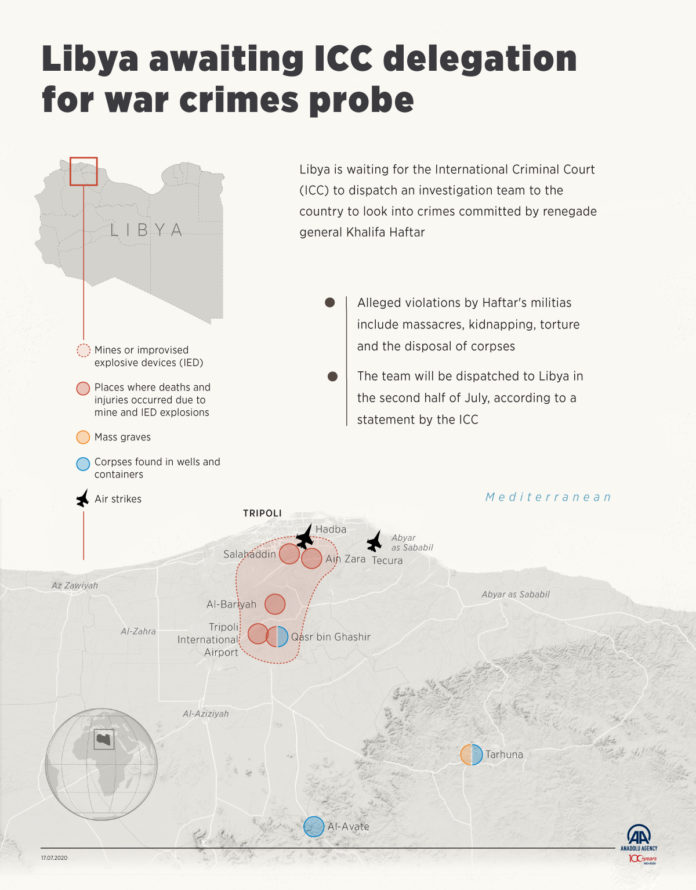 Libya is awaiting an International Criminal Court (ICC) delegation that will arrive in the country for a probe into alleged war crimes committed by renegade general Khalifa Haftar.

On July 7, the Libyan Foreign Ministry announced that the ICC agreed to dispatch an investigation team to the North African country to look into the crimes that Haftar’s militias are accused of being responsible for in southern Tripoli and the strategic city of Tarhuna in the west of the country.

The probe will begin later this month into the crimes allegedly committed during a 14-month siege on the capital.

The charges against Haftar’s militias include crimes against humanity such as massacres, kidnapping, torture and the disposal of corpses.

War crimes such as bombardment of civilian areas, as well as targeting hospitals and medical personnel, are also among the accusations.

As they retreated from south of the capital Tripoli and from the city of Tarhuna, Haftar’s militias left behind booby-trap mines and improvised explosives that prevented civilians from returning to their homes, as well as a trail of mass graves and corpses that could be deemed war crimes by international courts.

On June 16, the Libyan Center for Mine Clearance and War Remnants said that landmines planted by Haftar’s militia had killed 39 civilians and injured at least 100 others, including women and children.

“More than 400,000 civilians have been displaced by the war, and many of them cannot return to their homes due to mines,” Liam Kelly, director for Libya at the Danish Demining Group, an anti-landmine organization working in the country, told Anadolu Agency.

On June 20, the Libyan army announced that since June 5, some 190 bodies have been found in hospitals and mass graves in Tarhuna and areas south of the capital Tripoli.

The Libyan government has repeatedly called on the UN, ICC and human rights groups to demand an international investigation into the mass graves.

In late June, ICC Prosecutor Fatou Bensouda said the mass graves found so far in Libya may constitute evidence of war crimes or crimes against humanity.

The UN Human Rights Council on June 22 passed a resolution ordering a fact-finding mission to Libya in order to document violations and abuses committed since 2016.