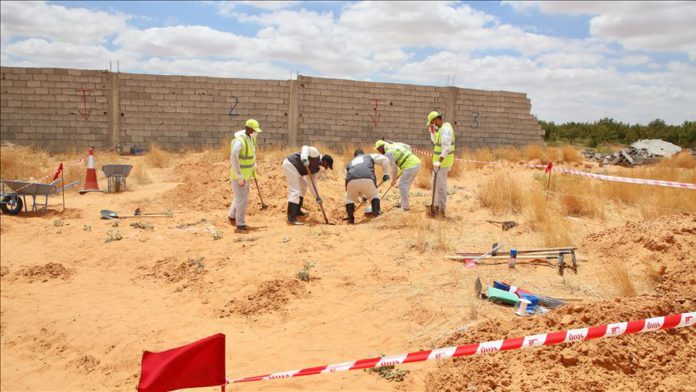 An Anadolu Agency team in Libya monitored the exhumation of bodies from mass graves in Libya’s western city of Tarhuna, which was recently liberated from the militia of warlord Khalifa Haftar.

Efforts were underway to identify the bodies extracted from the graves in al-Rabat area, southeast of Tarhuna, by Libyan security personnel, forensic medicine teams, and criminal security agents as well as the country’s health authorities.

The head of the forensic medicine committee of the Justice Ministry, Elias Mohamed Hamrouni, said that there are many places where they suspect the presence of mass graves.

He pointed out that they have so far found 11 mass graves in Tarhuna, noting that this number could rise in the coming days.

For his part, Nouri al-Ghali, a Tripoli Public Prosecution official, said that some of the bodies were buried handcuffed, indicating that they had been liquidated.

He stated that available data indicates that the found bodies were buried during the past 12 months.

Earlier this week, ICC Prosecutor Fatou Bensouda said that findings regarding mass graves in Libya may constitute evidence of war crimes or crimes against humanity.

On Saturday, the Libyan army announced that 190 bodies have been found in hospitals and mass graves in Tarhuna and areas south of the capital, Tripoli, since June 5.

The UN Human Rights Council adopted a resolution on Monday ordering a “fact-finding mission” to Libya in order to document violations and abuses committed since 2016.