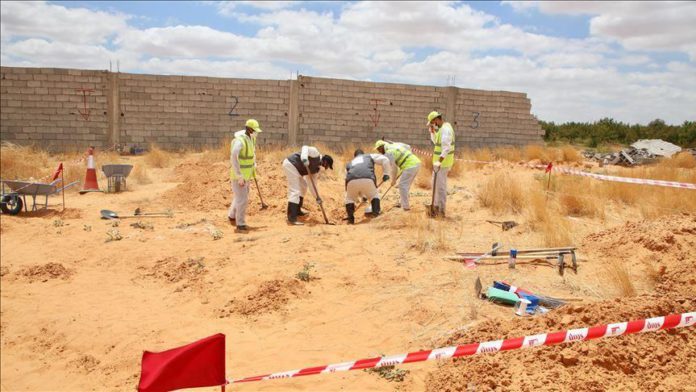 Nine more unidentified bodies were discovered in mass graves in the Libyan city of Tarhuna, an official said Sunday.

Kamal Al-Siwi, chairman of the Libyan General Authority for Research and Identification of Missing Persons, announced that the number of corpses discovered had risen to 19 since search efforts began on June 5.

Tarhuna, located around 90 kilometers (56 miles) south of the capital Tripoli, was the last stronghold in western Libya controlled by militias loyal to renegade general Khalifa Haftar before being recaptured in early June by forces allied with the Tripoli-based government.

Libyan authorities announced earlier this month that international efforts are underway to establish a fact-finding committee to investigate violations by Haftar’s militias, including planting landmines and digging mass graves as well as other violations in Tripoli and Tarhuna.

The Libyan Army recently inflicted heavy blows on Haftar and liberated Tripoli and Tarhuna from his militias in addition to other strategic locations, including Al-Watiya airbase.

Influenza vaccines to be applied gradually in Turkey