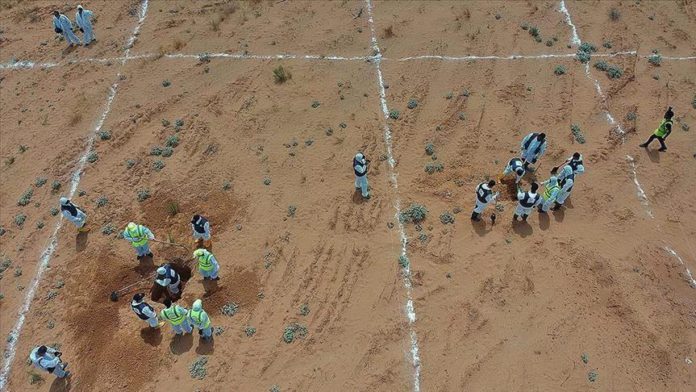 The Libyan army announced Wednesday that a total of 225 bodies have been unearthed from mass graves in the south of the capital Tripoli and in the city of Tarhuna and its surrounding areas in 40 days.

The corpses were found in areas liberated from eastern Libyan warlord Khalifa Haftar’s militia, according to a statement by the press office of the government-led Operation Volcano of Rage.

The statement said that since the liberation of Tarhuna from Haftar’s militias, an agency has taken the necessary measures to find mass graves and unearth the corpses.

At the beginning of July, the press office reported that the number of bodies found between June 5 and June 28 totaled 208.

On June 5, the Libyan army liberated Tarhuna, which was being used as an operation and supply center by militias loyal to Haftar.

Hundreds of corpses were found in the city hospital, a container belonging to the hospital and a water well near the city.

The most tragic part in Tarhuna came to light when mass graves were excavated as part of investigations opened by the Libyan government.

Since April 2019, Haftar’s illegitimate forces have launched attacks on the capital Tripoli and other parts of northwestern Libya, resulting in more than 1,000 deaths, including those of women and children.

However, the Libyan government has recently achieved significant victories, pushing Haftar’s forces out of Tripoli and Tarhuna.

Turkey sends aid to Afghanistan to back COVID-19 fight

November 25, 2020
We use cookies to ensure that we give you the best experience on our website. If you continue to use this site we will assume that you are happy with it.Ok