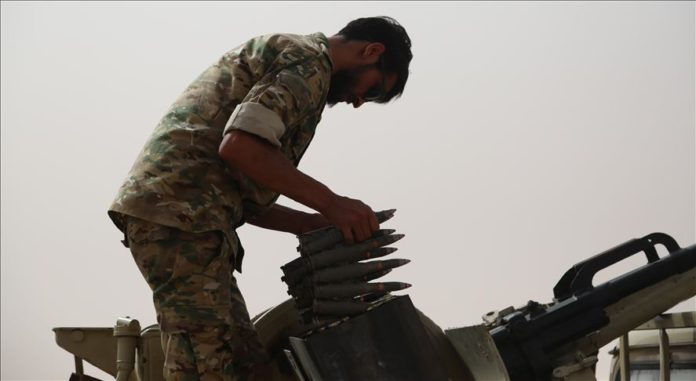 Twelve articles of agreement were reached Wednesday in meetings of the 5+5 Joint Military Committee on the implementation of a permanent cease-fire in Libya.

The military committee meetings in the town of Ghadames in the southwest ended and “agreed on concrete steps to be taken to implement the permanent ceasefire agreement,” according to a statement from the UN Libya Support mission (UNSMIL).

A military subcommittee was created to oversee “the return of military forces to their headquarters and the withdrawal of foreign elements from military lines of contact.”

Accordingly, the subcommittee, which decided to have its headquarters in Hun and Sirte, will hold its first meeting “in the near future” in Sirte with the participation of the 5+5 committee and UNSMIL.

Also, the 5+5 committee agreed to meet in Sirte as soon as possible later this month, and the committee’s headquarters would be the Ouagadougou Convention Center in the city.

It agreed on measures under the Supervisory Mechanism, including international observers.

To combine the guards of oil facilities, the chief of staff of the institution will hold a meeting in Brega, an oil city in the east, on Nov. 16 with participation from the head of the National Petroleum Authority and UNSMIL.

The agreed articles also include the exchange of detainees between the parties, while the subcommittee said it would continue working until it completed its file on this issue.

No further details were given about a prisoner exchange.

In addition to the articles, with the support and coordination of UNSMIL, it was decided to create technical teams for clearing mines, to make necessary arrangements at airports for the resumption of civilian flights in Sebha and Ghadames and to fight hate speech.

In a statement, UNSMIL urged the UN Security Council to quickly adopt a binding resolution on the implementation of the cease-fire agreement provisions signed on Oct. 23 in Geneva.

The military delegations, which previously met Oct. 19-23 in Geneva under the leadership of the UN, signed a permanent cease-fire agreement as a result of the fourth round of meetings.