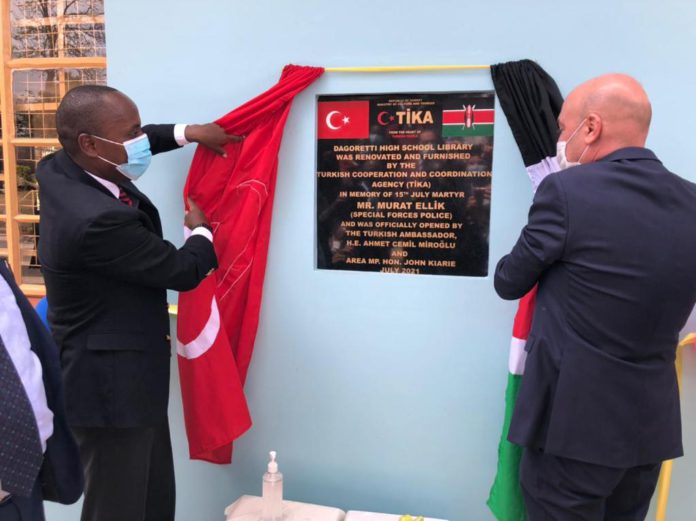 A Turkish state-run aid agency in Kenya opened a library on Wednesday in honor of Murat Ellik — martyred in a 2016 defeated coup in Turkey after completing his shift at the Embassy in Nairobi.

Ankara’s Ambassador to Nairobi Ahmet Cemil Miroglu, who officially opened the Dagoretti High School that was renovated and furnished by The Turkish Cooperation and Coordination Agency (TIKA), told a ceremony attended by students, parents, teachers and government officials, that before the “Turkish martyr” was killed, Ellik traveled to Turkey but was killed in the fighting against FETO terrorists.

“Therefore, on behalf our Embassy and the family of Mr. Ellik, I would like to extend our gratitude once more. Libraries are one of the most influential instruments to invest in children and investing in children is to invest in society’s future,” he said.

“It is my firm belief that this library, like many other projects carried out by TİKA all around Kenya, will stand as a symbol of Turkish-Kenyan friendship and cooperation between our countries as well,” he said.

“We believe education is a prime catalyst to a country’s national development and we must try as much as possible to ensure its provision on a comprehensive and equitable basis. We believe investing in education is investing in the country’s future,” said TIKA’s Nairobi Coordinator Eyup Yavuz Umutlu.

He noted that the library curriculum is part of its “program to support libraries for an enhanced reading and research culture.”

“He was in preparation for marriage, he had a fiancee, but he was martyred before getting married. He was just 25 years old when he was killed,” he said.

Yavuz said the library will forever be a symbol as it will keep Ellik’s name as a hero alive in the Kenyan capital which was the last place he served his nation.

Faculty, students and John Kiarie Waweru, a member of the Parliament for Dagoretti South Constituency in Nairobi, expressed gratitude for Turkish aid in renovating and furnishing the library.

FETO and its US-based leader, Fetullah Gulen, orchestrated the defeated coup where 251 people were killed and 2,734 injured.