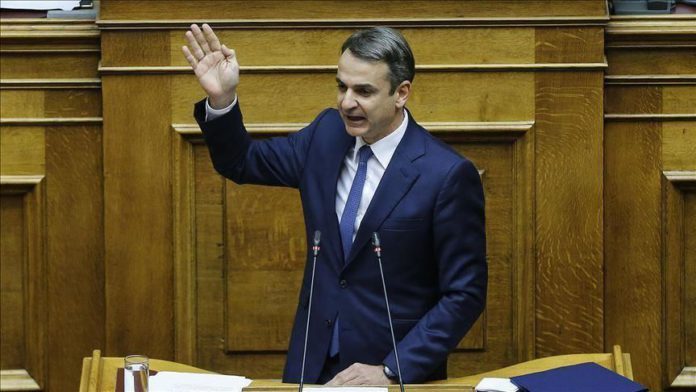 The Greek prime minister called for giving diplomacy a chance with Turkey on resolving the issue of the Eastern Mediterranean in his address to the UN General Assembly on Friday.

Kyriakos Mitsotakis said that in last year’s general assembly he extended “the hand of friendship and cooperation” to Turkish President Recep Tayyip Erdogan and showed “willingness to act as a bridge-builder for Turkey in Europe”.

He claimed Turkey escalated the tension in the region and said: “Everybody understands that this constant escalation of tension cannot continue. And I refuse to believe that partnership between close neighbors is not possible.”

Referring to the normalization agreement between Israel and the UAE, he said it is a proof that “years of suspicion and animosity” can be replaced by “cooperation and mutual understanding”.

“So, let’s meet. Let’s talk. And let’s seek a mutually acceptable solution. Let’s give diplomacy a chance. If, after all, we still cannot agree, then we should trust the wisdom of the International Court at the Hague,” he said.

Also referring to the start of exploratory talks between Turkey and Greece, Mitsotakis said that it “is a step in the right direction”.

“If President Erdogan really believes the UN stands as a beacon of hope and a bastion of global cooperation, I would urge him to act in accordance with this fact,” he added.

Turkey, the country with the longest coastline on the Mediterranean, has sent drill ships with a military escort to explore for energy on its continental shelf, saying that Turkey and the Turkish Republic of Northern Cyprus also have rights in the region.

The 61st round of exploratory talks between Turkey and Greece will start soon, the Greek Foreign Ministry said Tuesday.

The 60th round, the last of the exploratory talks initiated between the two countries in 2002, was held in Athens on March 1, 2016.

After this date, bilateral negotiations continued in the form of political consultations but did not return to an exploratory framework.

Turkey rejects, denounces in strongest terms statement of US president regarding...