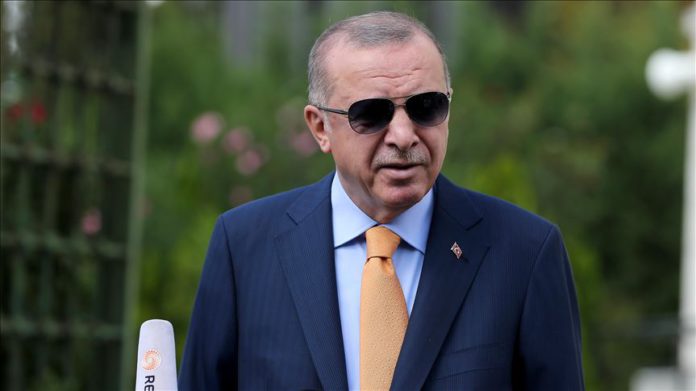 The Turkish president on Friday said Ankara is ready for talks with neighboring Greece over recent tension in Eastern Mediterranean.

“Let’s give diplomacy a chance, put forward a positive approach in diplomacy, let Greece meet our approach in a positive direction and we take a step accordingly,” Recep Tayyip Erdogan told reporters after the Friday prayers in Istanbul.

“We also told them this: We’re always ready to meet if there is goodwill, we can meet whether we have a meeting in a third country or through video conferencing, but we can do that.”

He said that Turkey has no “trouble” meeting with Greek Prime Minister Kyriakos Mitsotakis, but what is essential is “what to discuss and on what grounds to meet.”

Turkey’s energy exploration vessel Oruc Reis will return to the mission in the Eastern Mediterranean after maintenance work is over, Erdogan said.

However, he added: “If we returned Oruc Reis to the port for maintenance, it also means something. Why did we do it? This is a meaningful approach.”

Returning the Oruc Reis to a Turkish port does not mean “our seismic survey is stopped,” the Turkish president also said.

Last weekend, Turkey returned the Oruc Reis, a research ship exploring energy in the Eastern Mediterranean, to an Antalya port for restocking and maintenance work.

Tensions have recently escalated over the energy exploration in the Eastern Mediterranean.

Greece, Southern Cyprus and other EU members have tried to block Turkey’s energy exploration, claiming it is searching in Greek waters, using a maximalist view of Athens’ maritime territory based on small islands near the Turkish coast.

Turkey – the country with the longest coastline on the Mediterranean – says this view is illegal and makes no sense and has sent out drill ships, with military escort, to explore for energy on its continental shelf, saying that both Turkey and the Turkish Republic of Northern Cyprus have rights in the region.

It has repeatedly urged negotiations with no preconditions to lay out fair sharing of the region’s resources.

Meanwhile, Turkish and Greek military delegations have held technical meetings at NATO headquarters to discuss ways to reduce the risk of an incident amid rising tensions in the Eastern Mediterranean. The last talks were held on Thursday.

Answering a question whether a maritime boundaries deal is possible with Egypt, Erdogan said there is no obstacle for Turkey-Egypt intelligence talks, but also said Cairo’s agreement with Athens has “upset” Turkey.

Last month, Egypt announced that it signed a bilateral agreement with Greece on the “delimitation of maritime jurisdictions” between the two countries.

The Turkish Foreign Ministry slammed the deal, asserting that Greece and Egypt share no sea borders and that the deal is “null and void.”

Coronavirus rules to be tightened

As of Thursday, 298,039 people tested positive for coronavirus across Turkey, with the total death toll standing at 7,315.

Turkey has seen a rise in daily COVID-19 infections recently. “We need to tighten the coronavirus measures again,” Erdogan said.

On the vaccine work, the president said Turkey expects “positive signs” for a possible vaccine against COVID-19 in the new year.

More than 30 million people have been infected globally, with nearly 947,00 deaths and 20.55 million recoveries, according to figures compiled by the US’ Johns Hopkins University.