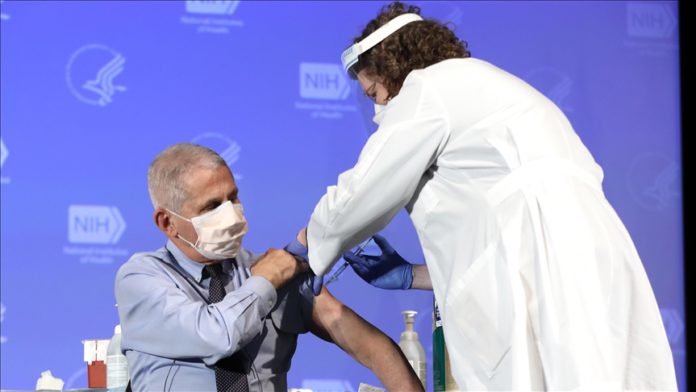 Almost two million people in the US have been vaccinated against COVID-19, according to the most recent figures from the national public health institute.

The large difference between the figures is a result of management of available vaccine stocks by jurisdiction and delays in reporting of administered doses, the CDC said, adding health care providers report doses to state, territorial and local public health agencies up to 72 hours after administration.

US pharmaceutical firm Pfizer and its German partner BioNTech announced Wednesday they made a second agreement with the US government to supply an additional 100 million doses by July 31 latest, for which they will receive another $1.95 billion.

The agreement doubles the total number of doses the companies have to deliver for the US market as part of President Donald Trump administration’s Operation Warp Speed.

After Vice President Mike Pence became the first top US official to get vaccinated on Dec. 18 broadcast on live television, he was followed by US House of Representatives Speaker Nancy Pelosi, Senate Majority Leader Mitch McConnell, and some other lawmakers.

Trump, on the other hand, has so far largely remained out of sight with days into the largest vaccination campaign in the US history.

The president recovered from COVID-19 in October after he received an experimental monoclonal antibody therapy. Trump should wait at least 90 days upon his treatment to get vaccinated to avoid any potential interference, according to the CDC.

A recent survey in the US, however, showed that only half of the population wants to receive COVID-19 vaccine shots, while a quarter of adults were not sure whether they want to get vaccinated against coronavirus, according to a survey from the Associated Press-NORC Center for Public Affairs Research released on Dec. 9.

Many of the undecided voice concerns over safety, indicating they want to see how the initial vaccinations turn out, according to the survey conducted among 1,117 American adults between Dec. 3-7.

At least 70% of US population needs to take the vaccine to achieve herd immunity, according to health experts.

The US still leads the world with over 19.1 million cases and more than 333,000 deaths, according to the latest figures from Johns Hopkins University.