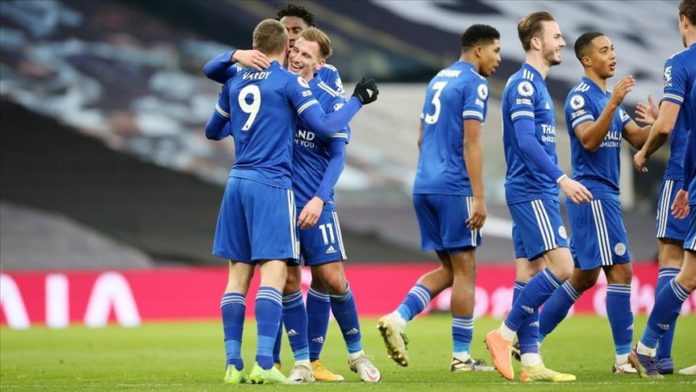 Leicester City won against Tottenham Hotspur 2-0 in a Sunday English Premier League match to reach number two in the standings.

The visitors Leicester City led the match near the end of the first half as English forward Jamie Vardy scored from a penalty in London’s Tottenham Hotspur Stadium.

In the 59th minute, Tottenham’s Belgian defender Toby Alderweireld scored an own goal as Leicester City secured the 2-0 win.

Second-place Leicester City have racked up 27 points over 14 weeks.

Tottenham were down to the number five spot, as the Spurs have 25 points in the league table.

Victor Lindelof and Daniel James were the other scorers for Manchester United.

The home team led the first half 4-1 to finish the job early.

Meanwhile the scorers for Leeds were Liam Cooper and Stuart Dallas.

The 6-2 win sent Manchester United to the number three spot in the standings with 26 points, 5 points behind the leaders Liverpool.