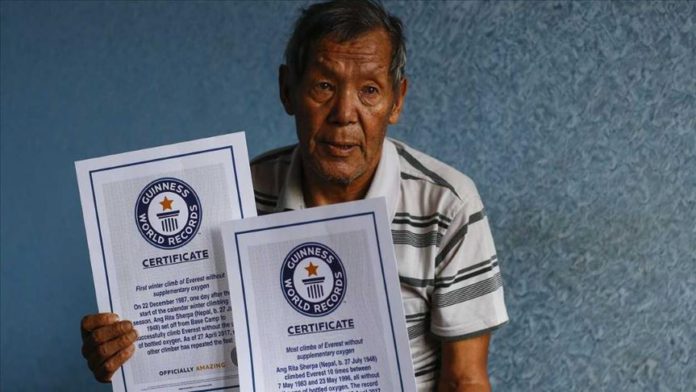 Ang Rita Sherpa, a legendary climber who holds the record for the highest number of summits on Everest without supplemental oxygen, died on Monday. He was 72.

He died Monday morning at his daughter’s home in Kathmandu, said Ang Tshering Sherpa, a former president of Nepal Mountaineering Association who belongs to the Sherpa ethnic group.

He suffered brain stroke in 2017 and had been bedridden since then.

Sherpa, called “Snow Leopard” for his remarkable feat of ten Everest summits in many years, reached the top of the 8,848-meter (29,000 feet) mountain without supplementary oxygen for the first time in 1987.

In 2017, the Guinness World Records awarded him a certificate for his feat. He reached the top of Everest for the 10th time in 1997.

“He will always be remembered for his outstanding performance, which has made the country proud,” Sherpa told Anadolu Agency. “We have lost a bright star of the mountaineering community.”

Sherpas, whose members are among the fabled climbers of the Himalayas, serve as the backbone of the mountaineering industry in Nepal. They work as porters and guides, helping foreign climbers scale some of the world’s highest mountains.

Ang Rita Sherpa was born in 1948 on a mountain village under the shadow of Everest.