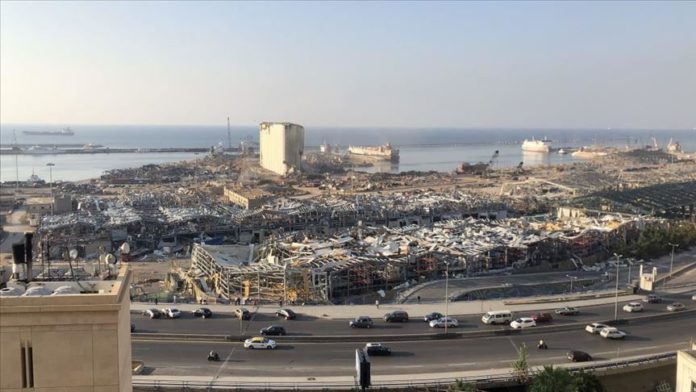 More than two weeks after devastating explosion here, the situation in the Lebanese capital remains critical, with a pervasive culture of negligence, corruption, and complacency by rulers becoming more visible.

Once considered the Paris of the Middle East, Beirut now looks like a scene from a horror movie, with collapsed buildings, unsurpassable roads, and broken glasses scattered everywhere.

The damage caused is estimated at more than $7 billion, equivalent to 14% of the country’s GDP, according to a report by the Institute of International Finance (IIF).

But Beirut’s governor said that figure may soar to as high as $15 billion.

The IIF also projected GDP could shrink from $52 billion in 2019 to $33 billion in 2020, given the large contraction operation needed to rebuild and the massive depreciation of the parallel exchange rate.

It is also expected that the explosion could cause the economy to contract from 15% to 24% in 2020.

In addition, the IMF already projected that Lebanon is going to be 50% under the poverty line by the end of the year.

“We have a triple crisis. We had a banking crisis, a currency crisis and a sovereign debt crisis,” he told Anadolu Agency.

Lebanon is one of the most indebted countries in the world with 152% of its GDP in debt and Ghanem said most banks in Lebanon are practically bankrupt, confiscating billions of dollars from depositors.

“I think the blast was a top of cherry on this massive catastrophe in the financial system,” he said.

In the aftermath of the explosion, international donors such as the IMF and the World Bank declared a willingness to help Lebanon but there is an issue of trust with the government, which has failed to implement vital reforms.

The international community demands structural reforms such as independence of the judiciary body and a public procurement law.

Yet, in order to implement those reforms, a new competent government is needed but since there is an absence of one, temporary parallel structures are urgently needed.

“Financial and humanitarian aid in Lebanon is a complicated subject,” said Ghanem.

“This international conferences basically gave Lebanon billions of dollars in aid on the condition of political and financial fiscal reforms,” he said. “None of these reforms have been implemented.”

Lebanon remains with no electricity, severe problems in waste management and water management because of corruption.

Also, residents required foreign donors not to deliver humanitarian assistance via the government, who they fear might steal or sell the aid, or share it only with interests groups.

“And if you give it to NGOs, it’s more accountable in a sense to international funders.

“But it wouldn’t be helpful for building Lebanon’s political institutions.” he noted.

He said because of past corruption, lack of trust and the ability of the current political class, those who hold that theory that says supporting NGOs is better are winning the debate.

Stating that the government has been given proposals for rebuilding the Lebanese port, he noted that reconstruction efforts is going to be part of a regional deal that resets the spheres of influence in the Middle East — meaning the Iranian, Turkish and Gulf spheres, in addition to the European and American spheres.

“Whenever this is known, reconstruction efforts in Lebanon is going to be hand in hand done,” he said.

“I don’t think any help is coming away from the Lebanese immigrants because they are already very angry,” was his response when asked whether the diaspora will help the government.

All remittances that historically used to come from immigrants are already stuck in banks and most savings were lost in the financial crisis back in 2019, he said.

He explained that Lebanon’s economy has been historically dependent on remittances from Lebanese immigrants living abroad.

“Lebanon has more than 15 million Lebanese outside the country with a population of 5 million internally. So you can imagine their impact on the economy.” he said.

Given the facts, Lebanon is in a difficult place because it is running out of ways to rebuild its economy.

For a country long plagued by sectarian strife, keeping peace became more important than having a government that was effective in securing the rule of law and infrastructure.

Lebanon faced many challenges during a 14-year civil war that was a battle between Christians, Shia and Sunni Muslims.

So the end of the war implied distributing power across those factions in government and by having a coalition government, they were able to keep the peace.

Yet this has led to corruption since the fractions wanted to manage their little fiefdom.

Now amid growing public anger, an incoming new government that will come to save Lebanon must make a decision whether to radically change the political system or continue to keep the peace.

Turkish party leader calls on Kurds to turn their back on...