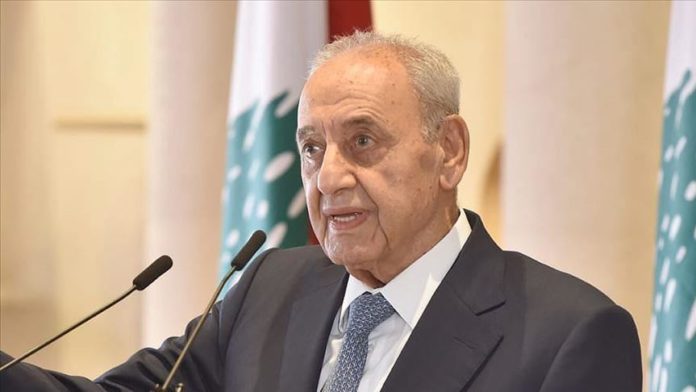 Lebanese Parliament Speaker Nabih Berri said on Thursday negotiations will start with Israel on the dispute of maritime and land borders under the auspices of the UN.

Speaking at a news conference, Berri said: “Negotiations to demarcate the borders with Israel will take place under the auspices of the UN with a link between land and sea.”

He did not specify a date, but David Schenker, the US State Department’s top official for the region, told reporters they would begin the week of Oct. 12, and possibly the Wednesday of that week.

Schenker said the landmark agreement is the result of three years of US-facilitated negotiations, and that both Tel Aviv and Beirut have requested the US mediate the talks, which will be hosted by the UN.

He will represent the US in the first round of talks, which will be held at the UN’s peacekeeping headquarters in the southern Lebanese city of Naqoura.

Berri said the Lebanese army would lead the negotiations under the auspices of the country’s presidency. He said that since 2010, he has been asking the UN to demarcate the maritime border with Israel.

Earlier on Thursday, US Secretary of State Mike Pompeo welcomed the agreement between Lebanon and Israel to start negotiations on the demarcation of the maritime borders, saying they “have the potential to yield greater stability, security, and prosperity for Lebanese and Israeli citizens alike.”

“Recognizing the positive experience of the tripartite mechanism, the US also looks forward to separate expert-level talks to define unresolved issues related to the Blue Line, which offer the promise of another positive step for regional stability,” he added.

The Blue Line refers to the border demarcation used by the UN as Lebanon’s boundary with Israel. The countries remain in a formal state of war.

The countries’ maritime borders have remained sensitive due to the possibility of finding hydrocarbon reserves in the area.

The Lebanese Cabinet approved a contract in 2017 for offshore drilling with energy companies, including Total, ENI, and Novatek for gas and oil.

Israel has made conflicting claims of ownership of at least one block claimed by Lebanon.

* Contributions by Bassel Barakat from Ankara, and Michael Hernandez from Washington, D.C.