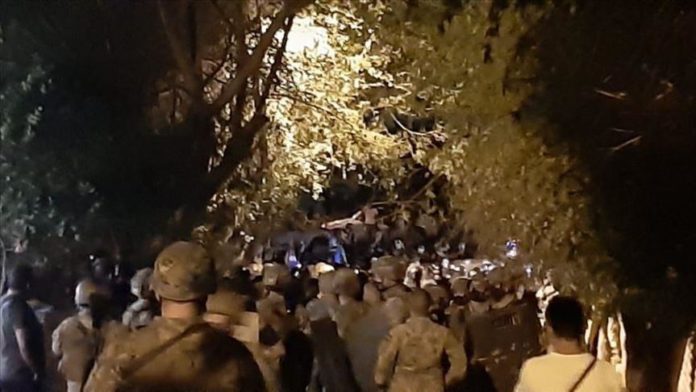 Members of the Armenian Dashnak Party gathered Monday in front of the Turkish embassy in Beirut to protest Turkey’s support for Azerbaijan in its fight against Armenian occupation.

The group of about 200 people hurled stones and fireworks at Lebanese security forces who sought to prevent the protesters from entering the embassy.

The protesters chanted slogans against Turkey and Azerbaijan and burned the flags of the two countries and then left the area.

Although Azerbaijan agreed to a fresh humanitarian cease-fire to exchange prisoners and the bodies of the dead, Armenian forces broke the truce only minutes after it was supposed to take effect, Azerbaijani President Ilham Aliyev said Monday, marking the third such truce broken by Armenia in less than a month.

World powers including Russia, France and the US have called for a lasting cease-fire. Turkey, meanwhile, has supported Baku’s right to self-defense and demanded the withdrawal of Armenia’s occupying forces.