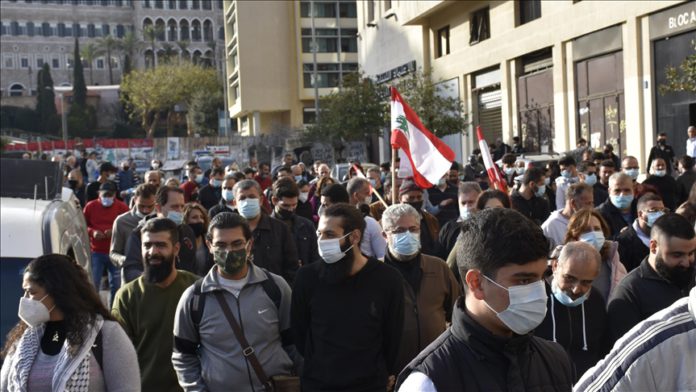 Allegations that authorities in Lebanon have smuggled money out of the country have sparked widespread anger here when one considers that Lebanese have not been able to withdraw money from banks since Oct. 17, 2019.

Following protests that started in 2019 because of the financial crisis, banks tightened limits on foreign currency withdrawals to $200 – $300 per week. And when the coronavirus pandemic began, cash withdrawal from those accounts were completely halted and a limit was set on local currency.

While banks, which face liquidity problems due to the crisis, kept deposits of Lebanese for nearly one-and-a-half years on grounds of preventing an outflow of capital, allegations that billions of dollars were transferred abroad by administrators caused an uproar.

Lebanese economists told Anadolu Agency that banks gave money belonging to customers to the Central Bank and in turn offered the deposits as loans to the state that is incapable of paying its debts.

Lawyer Dina Abou Zour, a founding member of the Depositors’ Union in Lebanon, said the crisis came to light with the Oct.17, 2019 mass protests.

Abou Zour said banks have faced a financial crisis due to a foreign currency shortage and thus are unable to pay deposits in dollar accounts.

She said banks are imposing restrictions on foreign currency deposit accounts to manage the situation and restrictions have been gradually expanded to include Lebanese lira accounts.

As a result of monetary policies implemented by central bank Governor Riad Salameh, people are currently unable to withdraw money even from local currency accounts, she added.

Noting that there is no legal basis for people to not have access to their deposits in foreign currency and local currency accounts, she said: “There are currently different exchange rates in the country. One of them is the official rate determined by the Central Bank as 1,500, a rate determined by the banks (3,900) and a rate traded on the black market (9,300). Therefore, even deposits withdrawn from banks are subject to serious cuts due to different exchange rates.”

She said that Switzerland is investigating Salameh for transferring money abroad.

“It is not new that Salameh transferred money abroad. There are reports regarding important transfers abroad just before the Revolution started. As they knew the current situation, it was as if some kind of money abduction operation was carried out,” she said. “Currently, it is said that the Central Bank Governor Salameh transferred $400 million to banks abroad on behalf of himself and his relatives. This is a persecution to be held accountable.”

Pointing out that Salameh and other large depositors who make transfers in Lebanon can be protected by political groups, she said the judiciary must defend the rights of the depositors, otherwise the international judiciary might step in, like the Swiss investigation.

She noted that banks started to apply illegal cuts to customers during this period and reactions of the banks against the cuts applied to their customers without any justification have yielded results and the practices have come to an end.

Lebanese economist Mahasin Mursil said there is no mechanism controlling the activity in banks’ accounts in Lebanon thus the Swiss investigation into Salameh is a step toward the suspicion that Salameh, his brother, or his deputy, was involved in money laundering.

“We are waiting for the results of the judiciary,” said Mursil.

She said after Oct. 17, 2019, around $10 billion were transferred abroad by executives.

“Foreign currency deposits in Lebanon were $176 billion in Aug. 2019. The Central Bank Governor Salameh announced this figure as $126 billion in information he gave to the Finance Committee in the Parliament after the Oct.17, 2019 demonstrations, and in July 2020, it decreased to $114 billion, 900 million,” she said.

Noting that withdrawing dollars from deposits has been completely suspended in Lebanon since Feb. 2020, she said:

“It has been a year since the restriction on foreign currency deposits of all Lebanese. The use of these deposits has been mishandled.”

“Banks have made these deposits available to the Central Bank, and from this amount there are now $17 billion, 500 million left. Of course, if the official figures announced are true,” she said.

Arguing that the banking sector cannot protect customers’ deposits, she said Lebanese have already demanded that accounts of the Central Bank be examined.

Domenick Karkas, head of the International Lebanese Youth Association and a student abroad, said nearly 30,000 students currently abroad are suffering due to the economic crisis and restrictions imposed by banks on foreign exchange transfers.

Saying that families have had problems sending dollars to children studying abroad since Oct. 17, 2019, when protests against the economic crisis started, Karkas said Parliament passed a new law known as “student dollars” to prevent the education of students from being affected, but it was not implemented.

Economic and political situation in Lebanon

The blast in the Port of Beirut in Aug. 2020 created a new government crisis along with growing economic troubles in Lebanon, which has long struggled with high public debt and unemployment.

Prime Minister Hassan Diyab’s government resigned Aug. 10, 2020, following the reactions after the explosion but a new government could not be established for months due to disagreements between political groups.

Considering the political forces and rulers as the cause of the economic crisis, the people of Lebanon demand the establishment of a diminished government consisting of technocrats, without sectarian political parties that have shared power for many years.