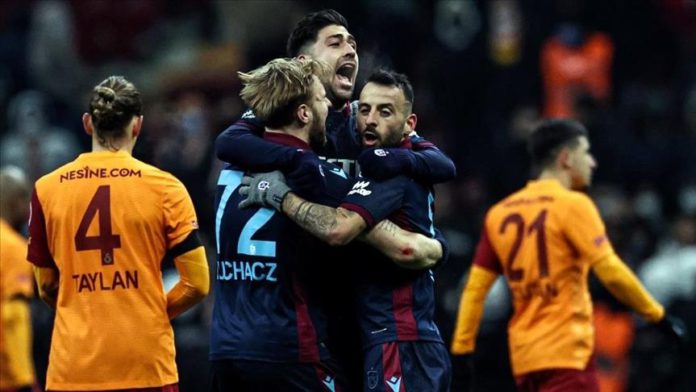 Turkish Spor Toto Super Lig leaders Trabzonspor bagged a magical 2-1 victory over Galatasaray with consecutive goals near the end of the match in Istanbul.

In the minute 30 at Nef Stadium, Galatasaray winger Kerem Akturkoglu was fouled in the box. The Lions were awarded a penalty kick after a video assistant referee (VAR) check.

Romanian midfielder Alexandru Cicaldau scored from white spot to give Galatasaray a 1-0 lead in the first half.

In the early minutes of the second half, the shots of Trabzonspor’s Danish forward Andreas Cornelius and Turkish defender Ahmetcan Kaplan shaved the post each.

The ball was on the loose as Bakasetas fired a low shot in the area to beat Galatasaray goalkeeper Fatih Ozturk.

Six minutes later Trabzonspor completed the comeback against the hosts.

In the stoppage time, Galatasaray forward Ryan Babel header’s near the six-yard-box was parried by Trabzonspor goalkeeper Ugurcan Cakir.

Big individual mistakes in the last minutes cost the earth for Galatasaray as Trabzonspor secured the away victory that shocked the Lions.

Trabzonspor are on top of the standings with 54 points in 23 league matches.

Ittifak Holding Konyaspor, their nearest opponents in standings, have 45 points after a 1-0 win against Altay in the western Izmir province.

Galatasaray are in a horrible season in the Super Lig and now they feel the heat of the relegation zone.

The Lions, who lost four Super Lig matches in a row, come 15th with 27 points.