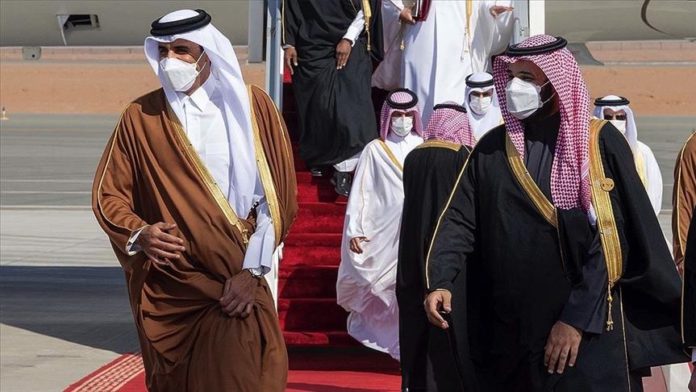 In a meeting marking reconciliation in the region, Gulf leaders on Tuesday signed a closing statement at the 41st Gulf Cooperation Council summit and a separate statement named after Al-Ula, the Saudi summit venue, according to Saudi TV.

In addition to hosting Saudi Arabia, the statements were signed by the leaders of the Gulf countries of Qatar, Kuwait, the United Arab Emirates, Oman, and Bahrain.

Details of the states have yet not been announced.

The summit kicked off earlier Tuesday in the northwestern Saudi city of Al-Ula amid historical reconciliation in the Gulf.

Hugging Al Thani at the reception, Saudi Crown Prince Mohammed bin Salman thanked Kuwait and the US for efforts to achieve the long-awaited “reconciliation.”

A video clip aired by the official Saudi Press Agency showed the prince warmly greeting the Qatari leader as he arrived in Al-Ula for the summit.

For his part, the emir of Kuwait, Sheikh Nawaf Al-Ahmad Al-Sabah, congratulated the Gulf leaders on reaching the deal, hailing it as “historic.”

Al-Sabah, in his opening speech, said: “I congratulate all of you for our historic achievement in today’s announcement that we have reached the signing of the Al-Ula agreement.”

He praised the efforts of Gulf leaders, US President Donald Trump, and White House adviser Jared Kushner for making “sincere efforts” in support of the Gulf agreement, and to achieving Gulf peoples’ “hopes and aspirations.”

He added: “We recall the sincere and constructive role played in this regard by the late [Kuwaiti] Emir Sheikh Sabah Al-Ahmad Al-Jaber, who contributed greatly to the success of this agreement.”

On Monday, Saudi Arabia and Qatar agreed to reopen their airspace, sea, and land borders, in a move signaling an end to the years-long Gulf dispute between Doha and its neighbors.

In 2017, Saudi Arabia, the United Arab Emirates, Bahrain, and Egypt imposed a blockade on Qatar, accusing it of supporting terrorism and meddling in their internal affairs.

Doha vehemently denied the allegations, accusing its neighbors of attacking its sovereignty.

Christian missions as imperialism through schooling