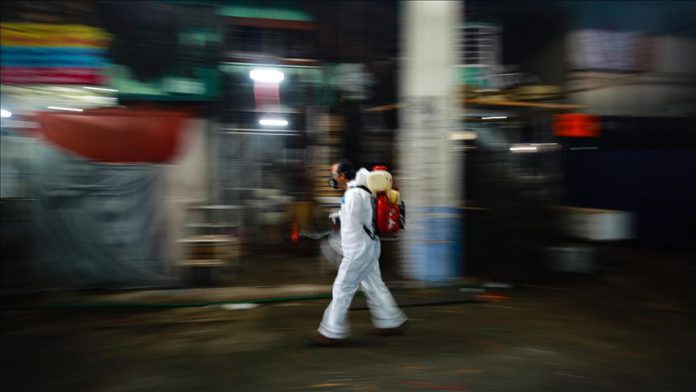 Latin America has surpassed the US and Europe in the number of new daily coronavirus infections, according to the World Health Organization (WHO).

The WHO noted Wednesday that 106,000 new cases were reported in the last 24 hours, the highest daily figure since the outbreak began, with many of them in Latin American countries.

Brazil has emerged as the new global epicenter of the pandemic. With more than 291,000 confirmed cases and nearly 19,000 deaths, Latin America’s largest nation is expected to surpass Russia as the country with the second-largest number of overall cases in the world, behind only the US.

President Jair Bolsonaro is under growing pressure over his handling of the outbreak, which is casting doubt on his re-election and has many wondering if he will even finish his term.

Ecuador’s Defense Minister Oswaldo Jarrín reported Thursday that 800 soldiers have tested positive for the coronavirus and there have been seven deaths among members of the armed forces due to the virus.

Ecuador has reported 34,854 coronavirus cases and 2,888 deaths. The peak of infections is expected during the following weeks in Quito, the country’s capital, which now has a similar rate of infections as Guayaquil, the city that has been hardest hit by COVID-19.

Quito is already beginning to feel the effects of the epidemic on its hospital care capacity. The mayor of Quito, Jorge Yunda, has ordered a temporary hospital to be set up with hundreds of beds at the first signs of collapse at the city’s hospitals.

Mexico recorded a new peak in deaths from COVID-19 since the first coronavirus case was reported on Feb. 28.

Health authorities reported 424 new deaths for a total of 6,090 since the beginning of the epidemic.

Guatemalan President Alejandro Giammattei said Thursday that the US is not an ally of his country in the fight against the pandemic. He criticized Donald Trump’s government for the deportation of migrants infected with COVID-19.

Giammattei said the arrival of migrants with the coronavirus has saturated quarantine centers in Guatemala and put a strain on its poor health system.

Of the more than 2,000 coronavirus cases in Guatemala, the authorities have reported around a hundred migrants deported from the US with COVID-19.

Cuba has not recorded new coronavirus deaths in seven consecutive days. The number of infections has also decreased in the last week, far from the average of 50 daily cases recorded last month.

According to official data, the epidemic is beginning to come under control on the island, where 1,908 people have been reported infected and 80 have died since March 11, when the first case was detected.

The challenge now lies in the long queues that form outside stores due to shortages of food.

UEFA lifts ban on away fans