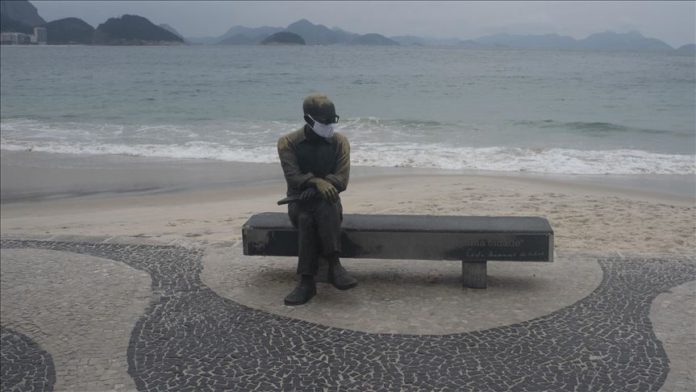 Latin America and the Caribbean became the world’s second most affected region behind Europe by the coronavirus Monday in the number of deaths.

The death toll in the region has reached 145,900 and cases stand at 3.3 million, according to a tally based on Johns Hopkins University figures.

As the global number of infections has risen by 1 million in five days, World Health Organization Director-General Tedros Adhanom Ghebreyesus warned at a press conference that there would be “no return to the old normal for the foreseeable future” and “there are no shortcuts out of this pandemic.”

He said many countries are heading in the wrong direction, adding “the virus remains public enemy number one.”

Brazil reported 733 more deaths and confirmed 20,286 new cases in the last 24 hours, according to the Health Ministry. That takes the country’s death toll to 72,833 and the number of cases to almost 1.9 million.

The South American nation is the second-most affected country in the world by the virus, just behind the United States. The states most affected by the disease are Sao Paulo and Rio de Janeiro.

Despite the virus still spreading rapidly, several states and cities in the country, including Sao Paulo and Rio de Janeiro, continued to reopen restaurants, outdoor places, social clubs and parks.

Deaths in Mexico from the pandemic rose above 35,000, with the country overtaking Italy for the world’s fourth-highest death toll.

An entire hospital in Mexico’s southern Oaxaca state has closed after 104 of its health workers tested positive for the coronavirus.

Behind Mexico, Peru has reported 12,054 deaths, Chile has 7,024 fatalities and Colombia has registered 5,634 deaths, surpassing Ecuador, which has reported 5,063.

Argentina exceeded 100,000 cases Monday, with Buenos Aires the hotspot of the pandemic with 95% of the infections in the entire country.

Lebanon: Education to resume on May 28