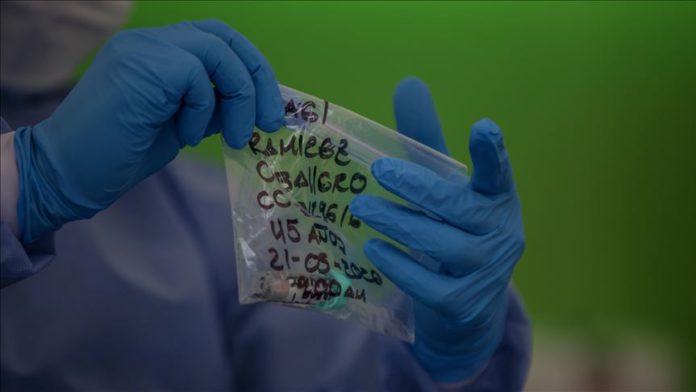 Latin America and the Caribbean surpassed 10.4 million cases and 380,000 deaths Monday from the novel coronavirus, which has infected more than 40 million people worldwide.

Despite a second wave emerging in Europe, Latin America is still the hardest hit region by the pandemic.

Argentina has become the fifth country in the world to exceed one million cases after infections accelerated in recent weeks.

The country follows in the footsteps of the US, India, Brazil and Russia, all with far larger populations than Argentina’s roughly 45 million people.

After having imposed a strict quarantine since March 20, the government has eased restrictions to help revive economic growth, leading to a rise in infections.

Colombian President Ivan Duque on Monday bashed a group of about 7,000 indigenous people who arrived in the capital Bogota on Sunday after travelling for a week from the Cauca region demanding to speak with the president in the midst of the pandemic.

“Where there are crowds, there is a path to resurgence, and a resurgence means setbacks, and here it is a matter of moving forward,” said Duque, referring to possible coronavirus infections in the group.

The indigenous Colombians congregated in front of the presidential palace Monday to draw the government’s attention to the rise in murders of indigenous leaders.

Nearly 966,000 people have been infected and more than 29,000 have died in the country from the coronavirus.

The US land borders with Mexico, which have been closed since March, will remain closed to all non-essential travel until Nov. 21, the US Department of Homeland Security said Monday.

The US remains the worst-affected country in the world by the coronavirus pandemic, registering more than 8.2 million cases and over 220,000 deaths, while Mexico has 851,227 cases and 86,167 deaths.

Brazil’s President Jair Bolsonaro said Monday that a COVID-19 vaccine will not be mandatory. The statement refutes the position of São Paulo governor and former Bolsonaro ally João Doria, who has said that vaccination will be mandatory and that massive immunizations could begin as early as February 2021.

“There is a governor who thinks he is a doctor in Brazil and says it will be mandatory, but it won’t be,” Bolsonaro told a group of supporters, in a clear reference to Doria. “This vaccine, said the Ministry of Health, will not be mandatory and that’s it,” he added.

Brazil recorded 15,383 additional confirmed cases of the coronavirus in the past 24 hours and 271 deaths from the disease, the Health Ministry said Monday.

It has registered more than 5.2 million cases of the virus since the pandemic began, and the death toll has risen to 154,176.

Venezuelan President Nicolás Maduro announced that as of Monday, various economic sectors will reopen in the country, including clubs and beaches, restaurants, stores, cafeterias and other sites that have been closed since mid-March due to the COVID-19 outbreak.

“The curve [of infections] has flattened out and the curve is steadily decreasing,” he said.

The country has recorded 86,636 cases and 736 deaths since the beginning of the pandemic.

US: States impose restrictions ahead of Thanksgiving