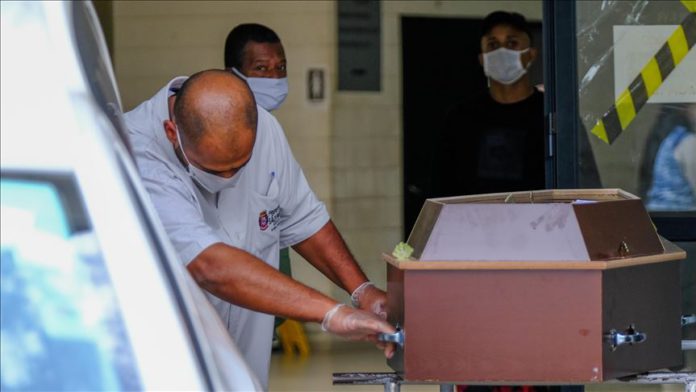 Latin American countries reported nearly 840,000 coronavirus cases and more than 45,000 deaths as of Thursday, with the region accounting for 40% of daily coronavirus deaths worldwide.

Brazil, Peru, Chile and Mexico have each reported more than 10,000 new cases in the past five days and their healthcare systems can no longer cope.

Brazil is set to pass the death counts in Spain and France in the coming days.

President Jair Bolsonaro held a news conference Thursday outside his presidential residence where he criticized countries like Argentina for the measures they have taken during the pandemic.

“Look at how far Argentina is going. Does anyone want that for Brazil?” he said. “We have taken measures to save the country from chaos. The government did its part. Because of measures that others took, many of the poor were transformed into miserable people. Many among the middle class have fallen into poverty, and it will be difficult to get the economy going,” he said.

Unemployment in the country rose to 12.6% in April and the pandemic has destroyed 4.9 million jobs, most of them in the informal sector.

Brazil is currently the country most affected by the pandemic in Latin America with 438,238 cases and 26,754 deaths.

On day 74 of its quarantine, Peru registered around 5,974 new infections and 116 more fatalities for a total of 141,779 cases and 4,099 deaths. The country is the second hardest hit by the pandemic in South America after Brazil.

Chile has registered a new record of 49 deaths from COVID-19 in the last 24 hours, bringing the total number of deaths to 890, while the number of cases has risen by 4,654 to 86,943 — surpassing China, where the pandemic began.

Some 68,000 migrants have returned to Venezuela from Colombia, forced by the economic downturn caused by COVID-19, even though many of the estimated 1.8 million migrants remain in the country.

The quarantine will continue in Colombia’s capital Bogota until at least June 15, the mayor announced Thursday.

Bogota was one of the first cities in the country to put lockdown measures in place in March. But after more than two months of confinement, authorities have begun to relax some rules for children. Those over 70 years old, however, are still forced to stay at home, which has led people to complain about the lack of freedom.

The country has reported 1,268 new cases of coronavirus, one of the highest figures to date, and has accumulated 24,141 cases throughout the territory. The total number of deaths has risen to 833.