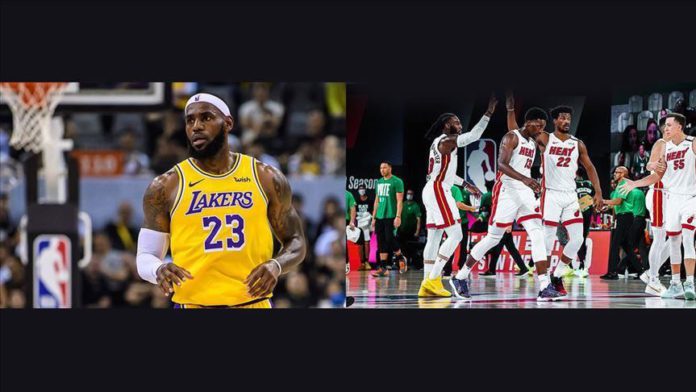 The Los Angeles Lakers defeated the Miami Heat 116-98 in Game 1 of the NBA Finals on Wednesday in Disney Sports Complex in Orlando, Florida.

Lakers’ superstars LeBron James and Anthony Davis combined for 59 points, while the Heat were hobbled by injuries from Goran Dragic, Bam Adebayo and Jimmy Butler.

Goran Dragic has a suffered a torn plantar fascia in his left foot and he will be re-evaluated, while Adebayo’s shoulder X-ray’s came out negative.

Jimmy Butler also sprained his left ankle but stayed in the game.

The Lakers managed to turn a 13-point deficit into a three-point lead in the first quarter and never looked back. Davis scored 34, James had an all-around performance with 25 points, 13 rebounds and 9 assists.

Anthony Davis, with his 34 points in the first finals game in his career, become the first Laker after Shaquille O’Neal (2000) to score 30+ points in his debut.

He has also become the first Laker to score 30+ points in an NBA Finals game since late Kobe Bryant do it with 38 points in Game 5 of the 2010 Finals.

In another interesting stat, this is the first ever NBA Finals matchup that two teams that reached to the finals, did not make it to the playoffs the season prior.