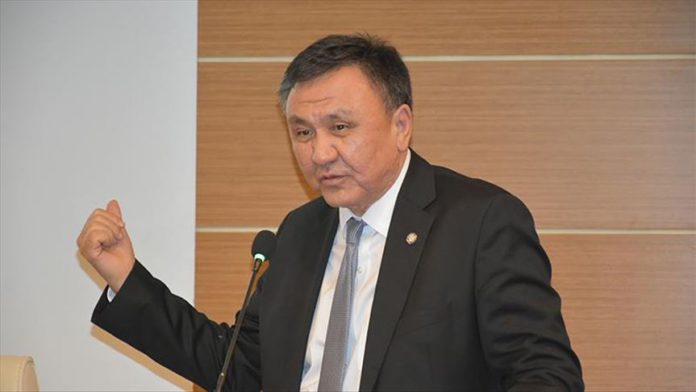 Kyrgyzstan has flown back 1,087 of its nationals from Turkey since the beginning of the COVID-19 outbreak, according to the country’s envoy to Turkey.

In an interview with Anadolu Agency, Ambassador Kubanychbek Omuraliev said the country “appreciates the assistance of the Government of Turkey with the return of citizens to Kyrgyzstan” during the repatriation process.

The embassy had received more than 1,500 applications for the repatriation from “citizens who had arrived in Turkey before the pandemic started for treatment, holiday tours, to visit their relatives and from citizens who have lost their jobs” and could not return to Kyrgyzstan due to the cancellation of international flights.

“The embassy worked with the Turkish authorities to obtain permits from local authorities in the cities of Ankara, Antalya, Izmir, Kastamonu, Karabuk, Kayseri and Konya for citizens of Kyrgyzstan to travel to Istanbul International Airport.”

Repatriation appeals continue to be received at the embassy in the capital Ankara and the Consulate General in Istanbul, but not in the same amount as at the beginning of the pandemic, he said.

Kyrgyz nationals living in Turkey are still safe from the pandemic with no infections or deaths from the coronavirus so far, he said.

To assist and meet the needs of its citizens, Omuraliev said, the embassy continued to work as usual but complied with the requirements and measures taken by the Turkish government to protect the population from the spread of the virus.

Consular section services have been conducted by appointment for citizens during this period to avoid their gathering at the embassy building, said the envoy.

Omuraliev underlined that the diplomatic mission has taken all precautionary measures, including the use of masks and gloves, disinfection of the embassy building, installation of disinfection devices at the entrance of the embassy for employees and visitors and minimization of visits to public places, while the family members of employees stayed at home due to the declared quarantine in kindergartens and schools.

The ambassador highlighted that local authorities and various foundations in Turkey through the members of diaspora assisted in the form of food packages to citizens in need who had been left without any resources after losing their jobs.

“The international community needs to strengthen cooperation to a qualitatively new level in the prevention of global cataclysms and the adoption of measures to eliminate them, including concerning COVID-19,” Omuraliev said.

In this regard, he underlined the cooperation at the regional level within the framework of the Turkic Council, noting that on April 10, the heads of states of the council held an Extraordinary Summit through a videoconference devoted to the fight against the spread of the coronavirus infection.

Following the summit, the sectoral ministries of the Turkic Council, including the ministries of health and economy, held a videoconference and agreed to create multilateral cooperation mechanisms and begin implementing the tasks, he said.

Omuraliev noted that the Muslim holy month of Ramadan is being observed this year in unusual quarantine conditions and under strict restrictions amid the virus.

“Like all Turkish citizens, members of our diplomatic mission will also celebrate Eid al-Fitr at home with their families in compliance with all precautions.

“I think this crisis will teach us to be patient as well as appreciate more what is taken for granted, the simplest things — respect for each other, especially for close ones, live communication, meetings, a walk in the fresh air.”

Relations between Ankara and Bishkek have been developing “in the spirit of a common history, culture, language and religion” as the cooperation has reached “the level of a strategic partnership, formalized in a form of the High-Level Strategic Cooperation Council between Kyrgyzstan and Turkey,” said Omuraliev.

Turkey is one of the five largest trade and economic partners of Kyrgyzstan, he said, adding that last year, the trade volume between the two countries amounted to $473.8 million and increased by $49.5 million compared to 2018.

“Considering the great unrealized potential of cooperation in this sphere, the presidents of our countries have set the task of bringing trade up to $1 billion.”

Omuraliev said that following the 9th meeting of the Kyrgyz-Turkish Intergovernmental Commission on Trade and Economic Cooperation on Nov. 22, 2019 in Ankara, an action plan for the development of trade and economic cooperation between the two countries with specific tasks and the timing of their implementation was adopted.

He recalled that as a result of a large-scale Kyrgyz-Turkish Business Forum held in Istanbul at the end of last year with the participation of 350 businessmen from both countries, a total of seven memorandums of cooperation between companies and organizations of the two states were signed.

Also, work is being carried out in the regions, the ambassador said, noting that one example of this is the Kyrgyz-Turkish Business Development Forum held in Karaman, a central Anatolian province, in January 2020, due to which “specific agreements” were reached between businessmen.

“It is important to note the cooperation of the Chamber of Commerce and Industry of Kyrgyzstan (CCI) and the Union of Chambers and Commodity Exchanges of Turkey (TOBB). A joint Kyrgyz-Turkish Trade and Industry Forum (KTTIF) was created through them, which helps strengthen the economic ties between our countries.”

Omuraliev added that the Kyrgyz-Turkish Business Council under the Foreign Economic Relations Board of Turkey (DEIK) conducts successful operations in this area.

The first case of infection in Kyrgyzstan was registered on March 18, and the first virus-related death on April 2.

“To coordinate the activities of government institutions and make operational decisions to prevent the entry of coronavirus infection into the country, the Government of the Kyrgyz Republic established the Republican Headquarters by the decision of the Security Council,” he said.

The country’s borders for the entry of foreign citizens have been closed since March 19.

On March 22, a state of emergency was declared throughout Kyrgyzstan.

On March 24, Kyrgyz President Sooronbay Jeenbekov signed a decree on the introduction of a state of emergency in the territories of two large cities — Bishkek and Osh — as well as in some regions and districts, he said.

On May 11, the state of emergency was lifted, Omuraliev said, adding that economic activity has been reactivated gradually in the country.

The pandemic has killed over 333,000 people worldwide, with more than 5 million confirmed cases, while recoveries have surpassed 1.9 million, according to figures compiled by Johns Hopkins University of the US.