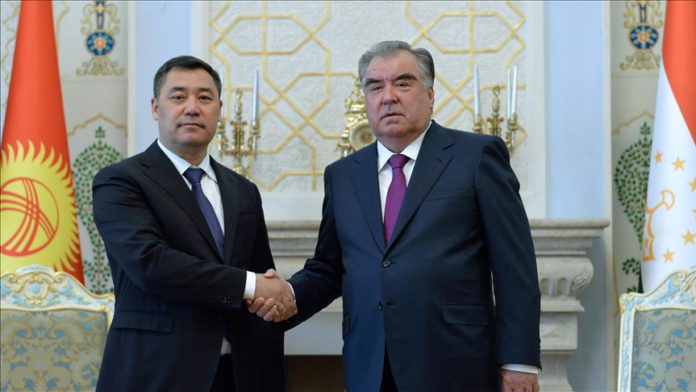 Kyrgyzstan and Tajikistan leaders met for the first time in Tajik’s capital, Dushanbe, on Tuesday following conflicts at the border.

Kyrgyz President Sadyr Japarov visited Dushanbe and was received with an official ceremony at the Palace of Nations before meeting his Tajik counterpart Emomali Rahmon, according to a statement by Kyrgyzstan’s Presidential Press Center.

The two men had a one-on-one meeting, and Rahmon said Tajikistan was ready to discuss the status and expectations of relations.

Tajikistan and Kyrgyzstan are in a multilateral and constructive interaction, he added.

Japarov thanked Rahmon for his invitation and expressed sadness for the “tragic” incidents in late April. He said history would record the dates with sorrow as it was a historic test.

He underlined that the two countries have always maintained neighborly and friendly relations and said neither should ever allow the reoccurrence of armed conflicts.

Violence erupted April 28 between Tajikistan and Kyrgyzstan centered on control of a local water distribution network, according to Kyrgyz media.

Surveillance equipment was installed by Tajik officials at the Golovnoi water distribution center, which Kyrgyzstan said is located in an area where sovereignty is yet to be defined, said Radio Free Europe news website.

Clashes erupted with the intervention of border troops from the two countries and soldiers were sent to the region with armored vehicles.

Tensions continued, however, with residents throwing stones at each other.

At least 55 people were killed, including a 13-year-old girl, and 183 wounded along the disputed segment of the border, according to the Kyrgyz Health Ministry.

One of 4 employees detained in Egypt, Hilmi Balci, released, says...