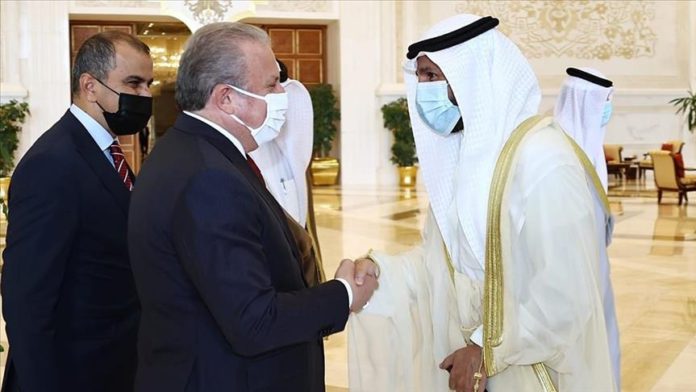 Turkey’s Parliament Speaker Mustafa Sentop and an accompanying delegation met with Al-Sabah at Bayan Palace as part of a two-day official visit, according to the official Kuwait News Agency (KUNA).

During the meeting, Al-Sabah emphasized the significance of the decades-old historical relationship between the two countries, saying they recalled with pride the opening of the Kuwait Embassy in Ankara in 1971.

Praising Erdogan for his support to Kuwait, he said: “Erdogan is a brave man with his stance, words and actions. We have love and respect for him.”

Al-Sabah also expressed his happiness for “the visit of the friendly country Turkey’s parliament speaker and the accompanying delegation to their second country, Kuwait.”

Recalling Turkey’s stance during the Iraqi invasion of Kuwait in 1990, he said: “It is not surprising that this country, which is ancient in terms of its origins, culture and people, has authentic and loyal stances. We reiterate our thanks. Kuwait does not forget the stance of its brothers and friends.”

Also, praising the role of Turkish companies in the implementation of some important infrastructure projects in Kuwait, he said the Kuwaiti administration, government and investment bodies are proud of the increase in the volume of Kuwaiti investments in friendly country Turkey due to the economic aspect of development opportunities for both sides.

Additionally, Turkey has become a destination for Kuwaiti tourists, he added.

For his part, Sentop said: “The deep-rooted historical ties, common cultural values and mutual affection between our peoples further strengthen the friendship between our countries.”

Stressing the efforts made to further deepen the cooperation between the two countries in every field, he said he is pleased to be able to resume mutual high-level visits, which were interrupted for a while due to the coronavirus pandemic, and to meet face to face.

Russian invasion of Ukraine would be 'disastrous step,' UK reiterates