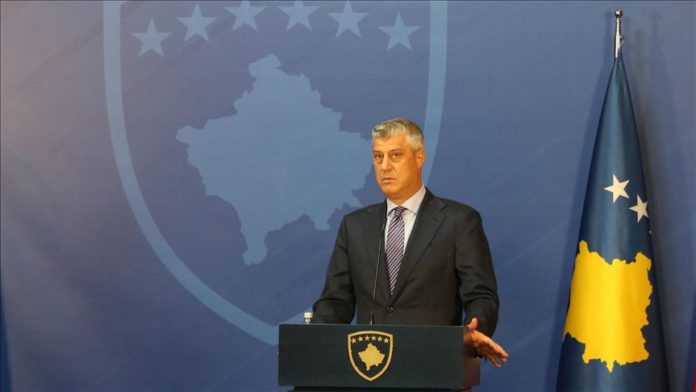 Kosovo’s president said Monday he would immediately resign if a court in The Hague confirms war crimes charges filed against him last week.

Prosecutors in The Hague filed an indictment against Hashim Thaci for crimes against humanity and war crimes during Kosovo’s 1998-99 war with Serbia.

Addressing the nation, Thaci rejected the accusations against him.

“My heart is hurt, but not broken. My mind weighs heavy, but is not bleary. My blood is heated, but clean,” he said, adding “there has not been and could not be even a single piece of evidence” against him.

He also vowed to consult with Kosovo’s political leaders in the following days to discuss the next steps.

The indictment alleges that “Thaci and other suspects are criminally responsible for almost 100 murders. The victims of the criminal acts are hundreds of persons whose identities are known, among whom are Kosovo Albanians, Serbs, Roma and persons of other nationalities as well as political opponents,” said a statement from the Specialized Chambers.

On Monday, Albanian Prime Minister Edi Rama unexpectedly arrived in the capital, Pristina, where he met with Thaci and other Kosovar leaders.

Thaci commanded guerrilla forces under the banner of the Kosovo Liberation Army (UCK) during the conflict with Serbia.

Israeli spy lands in Israel after 35 years in US prison