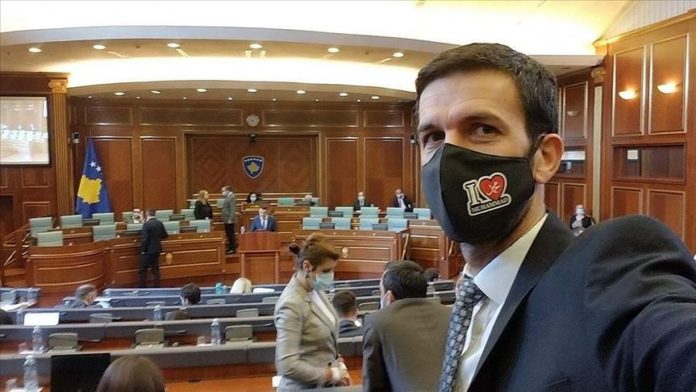 A member of Kosovo’s parliament took part in a plenary session Sunday wearing a mask that read “I love Muhammad.”

Eman Rrahmani, a member of the Self-Determination Movement, said he wore the mask for two reasons.

“The first is related to the fact that our institutions did not react to [Kosovo’s] Ambassador [to France] Qendrim Gashi over his distribution of an inappropriate article containing caricatures of Prophet Muhammad, while the second purpose was because we are in the month of the Prophet’s birth,” said Rrahmani.

He posted a photo of himself on social media wearing the mask with the message: “React with calm and tenderness. Do not insult or ridicule. Muhammad (pbuh) is a messenger of mercy for mankind.”

Gashi wrote on his Facebook profile that he was very sorry that some people may have been hurt by his move but it was “because they did not know the details and context of the journalistic article.”

He justified the sharing on his Twitter account of an article from the French newspaper “Le Figaro” published on Oct. 19 which presented a chronology of events leading up to the beheading of a teacher in Paris earlier this month with the fact that he “does not censor the media.”

Rrahmani said Ambassador Gashi should be held accountable before state institutions for the scandalous action and that citizens who pay his salary should not allow themselves to be ridiculed over their faith.

Samuel Paty, a 47-year-old father who taught history and geography at Bois-d’Aulne College in Conflans-Sainte-Honorine, was brutally murdered by Abdullakh Anzorov, an 18-year-old man of Chechen origin. The suspect was gunned down by police.

The teacher, during one of his classes on freedom of expression, had shown the controversial cartoons depicting Prophet Muhammad, according to the reports.