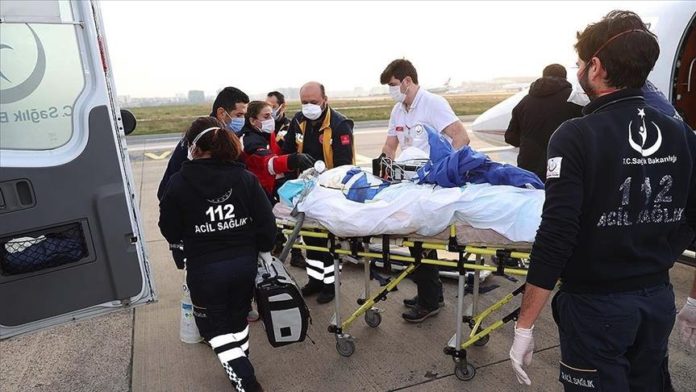 Four victims of an explosion in Kosovo arrived in Turkey for medical treatment on Thursday.

An ambulance plane was sent to Kosovo to transfer victims to Turkey upon an order by President Recep Tayyip Erdogan.

More than 40 people were injured in a gas cylinder explosion in a restaurant in Ferizaj city on Tuesday.

Kosovo’s Health Minister Armend Zemaj, who closely followed the patient transfer, said he hopes that the victims will return to Kosovo in complete health after their treatment.

“Thank you to the people of Turkey and the government for assistance in the best and the shortest time for the recovery of our citizens and patients,” said Zemaj.

Turkey’s Ambassador to Pristina Cagri Sakar said that there is a very comprehensive relationship between the Health Ministries of Turkey and Kosovo.

“We are able to show solidarity with our Kosovar friends today,” said Sakar.

The treatment of the injured will be carried out in Istanbul at the Bagcilar Training and Research Hospital and Kartal Dr. Lutfi Kirdar City Hospital

Some 14 people with severe burns on their bodies were transferred to the Kosovo University Clinical Center in the capital Pristina.