TurkishPress
Home News Kobe Bryant, 'the student of the game' remembered on second anniversary of... 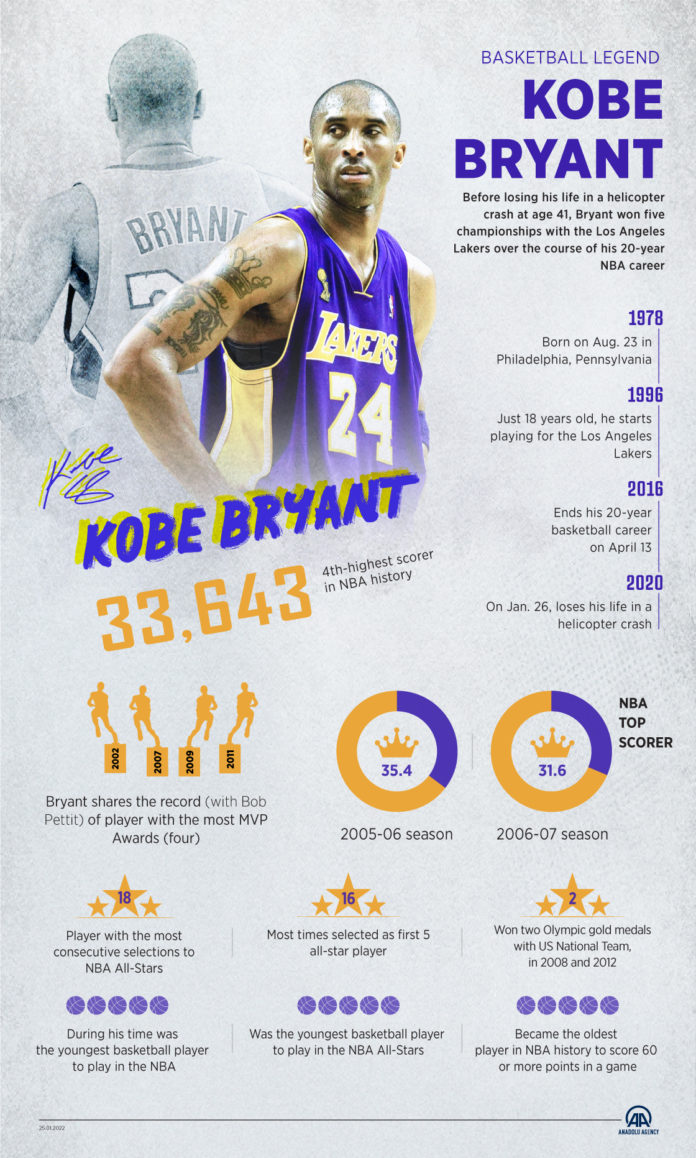 Fans, basketball teams, sports world around the world send their condolence messages to Bryant, her daughter and seven others who lost their lives in the crash.

His dedication to the game, competitiveness, intense training and work ethic made him a “student of the game.”

Bryant once told in an interview, “The players had that passion but weren’t willing to commit their entire lives to do that. It’s a choice.”

Bryant expressed his commitment by adding that he did nothing for just doing it because when he retired, he didn’t want to have to say, “I wish I would have done more.”

With that mentality, the Black Mamba always pushed himself to his limits to be better than anyone and better than himself throughout his career.

Bryant is considered one of the greatest players and often compared by many to Michael Jordan, who Bryant himself called “big brother.”

Chosen 13th by the Charlotte Hornets in the 1996 draft, the Los Angeles Lakers acquired Kobe Bryant in exchange for Serbian center Vlade Divac.

Bryant wore the Lakers jersey at the age of 18, becoming the youngest basketball player to play in the NBA at the time.

On Jan. 22, 2006, Bryant made history as he scored 81 points in the Lakers vs. Raptors game and became the “second-highest scorer in an NBA game” after Wilt Chamberlain, who scored 100 points in 1962.

Nicknamed himself “Black Mamba,” Kobe Bryant had a historic streak in the 2006-2007 season as he scored 65, 50, 60 and 50 points in March, respectively and became the “second NBA player to pass the 50 point mark the most in a row” after Chamberlain, just one of his many accomplishments throughout his illustrious career.

The Black Mamba ended his distinguished career with a high note as he scored 60 points in his last NBA game against the Utah Jazz on April 13, 2016, and became the oldest player in NBA history to score 60 or more points.

Bryant died on Jan. 26, 2020, at the age of 41, along with his daughter Gianna and seven others, when the helicopter crashed on his way to the basketball game at the Mamba Sports Academy, which he founded.

After his passing, the NBA honored him as the NBA All-Star game MVP (Most Valuable Player) award has was permanently named for Kobe Bryant in February 2020.

The trophy is referred to as “The Kia NBA All-Star Game Kobe Bryant MVP Award.”

Aug. 24 is dedicated to legendary shooting guard ‘Kobe day’ due to Bryant’s jersey numbers 8 and 24 through his 20 years of Lakers career.