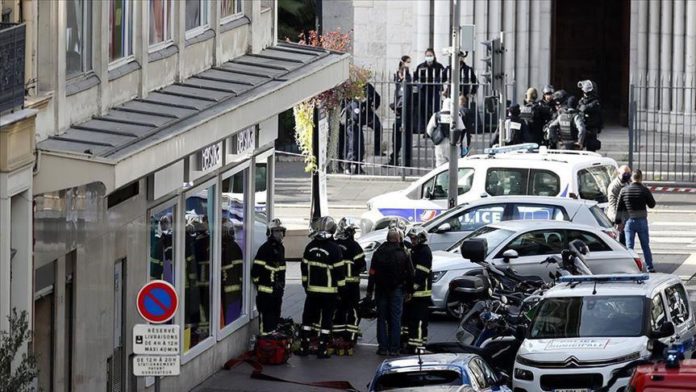 Three people are confirmed dead and several others wounded in a knife attack in the French city of Nice on Thursday, according to French authorities.

The attack took place near the Basilica of Notre Dame de l’Assumption. Police have arrested the perpetrator, taking him to a hospital as he sustained gunshot wounds, according to local media.

The deceased include one man and two women, two of whom were beheaded, according to local media reports. Police confirmed that at least one person was decapitated.

According to franceinfo, Mayor of Nice Christian Estrosi — who was on the scene — said two people were reportedly killed inside the church “in the most horrible way possible, like professor,” referring to teacher Samuel Paty who was beheaded in a suburb outside Paris earlier this month.

Another woman perished outside of the church, succumbing to her wounds.

“Nice: a police operation is in progress. Avoid the area and follow the instructions,” French Interior Minister Gerald Darmanin wrote on Twitter. The minister has also called an emergency meeting at the Matignon, which President Macron will attend.

“The situation is now under control,” said a local policewoman around 10.30 a.m. local time (0930GMT). Law enforcement was immediately on the scene.

“I confirm that everything suggests a terrorist attack in the Notre-Dame Basilica,” tweeted the mayor.

The National Anti-Terrorism Prosecutor’s Office has opened an investigation.

Thursday morning’s attack is the latest in a spate of terror acts gripping the country amid growing tensions in France over anti-Islamist measures.

In a separate incident on Thursday, French police shot dead a knife-wielding man who reportedly threatened police officers in the French city of Avignon, according to local media.